I almost feel as though this post needs a disclaimer. Yes, I absolutely loved the Hogsmeade portion of the Wizarding World of Harry Potter at Universal Orlando, but I didn’t fall in love with it to the same degree that I did with Diagon Alley the day before. Still, the pull of seeing Hogwarts castle was an undeniable highlight.

Perhaps I’m being a bit unfair to Hogsmeade in saying that, but it was how I felt. I still loved it, and still felt in awe as we walked around, staring into windows, exploring the stores, and gazing up at Hogwarts.

Day Two began with an hour early entry to Hogsmeade, a perk when you stay at one of the three Universal resorts. The Hogsmeade section was the first of the two to be built, and as such it didn’t seem as expansive. While it has more rides than Diagon Alley, roughly half the buildings are purely for decoration purposes, and you are unable to enter them. We suddenly understood the comments we’d received of “you’re spending two days there?” from friends who had only experienced Hogsmeade. 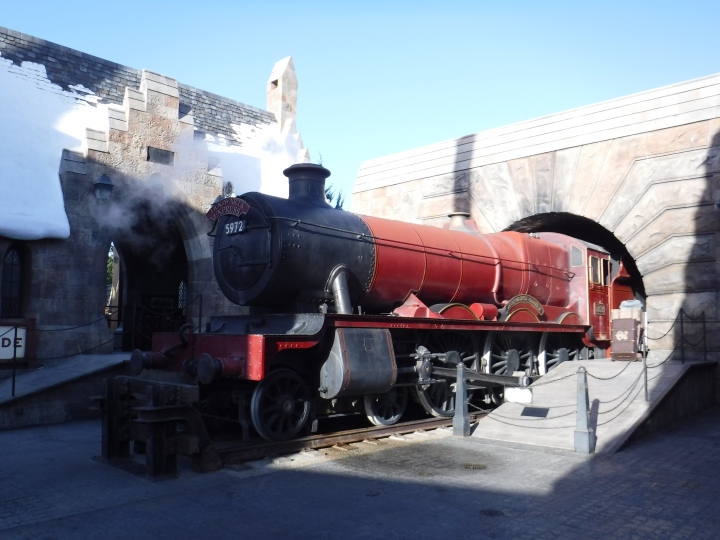 Don’t get me wrong – there was plenty to love about Hogsmeade. I already knew I loved two of the rides, having previously ridden on them when they were known as Dueling Dragons (now Dragon Challenge) and The Flying Unicorn (now Flight of the Hippogriff), and The Forbidden Journey blew me away. The ride is flat out phenomenal, and blends animatronics and video motion well. So well, in fact, that when we first rode it, I felt light-headed and ill afterwards, but that proved to be a one-time thing.

Although we had briefly seen Hogwarts the night before, it didn’t compare to how it felt seeing it in full daylight. I became rather emotional and teary-eyed as I gazed up at the castle I had so vividly imagined spending time in, and knew that even if the park had only been a tour of the castle, I would have paid almost any amount. 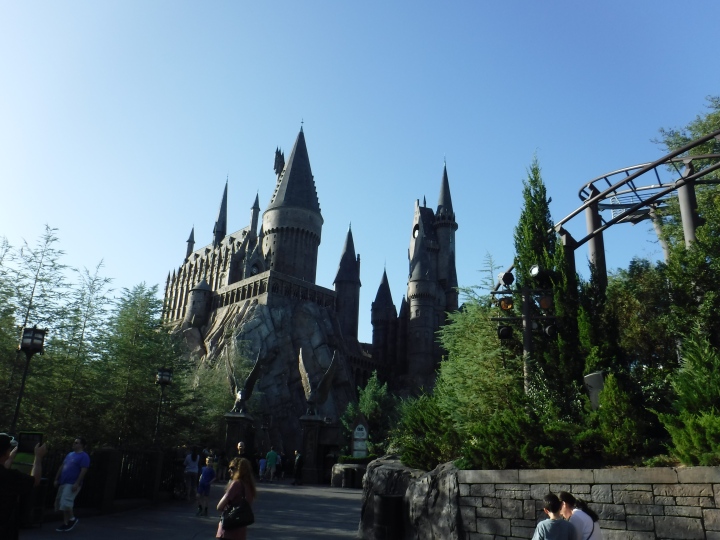 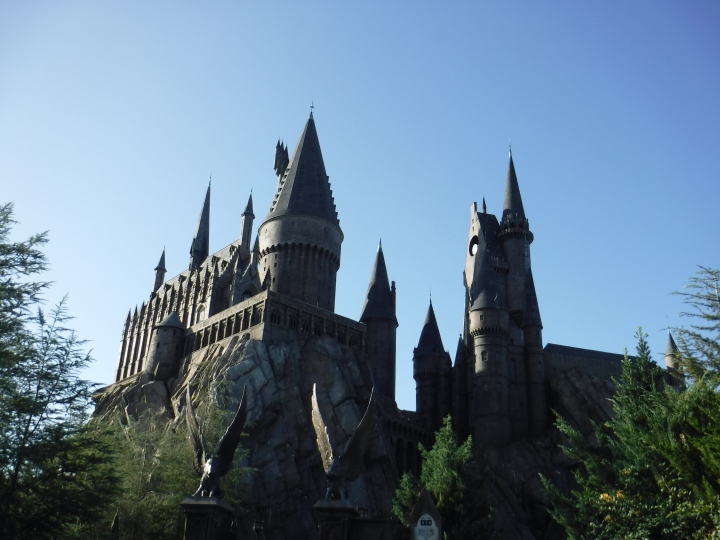 As with Escape from Gringotts, I recommend going on multiple times, and paying very close attention to all the details while you’re in line. There’s so much to see that even going through multiple times, I’m sure there was a lot we missed. From hearing portraits of the original founders bickering to walking through a greenhouse, you won’t be bored waiting in line.

Once our early entry time had expired, we decided to grab some breakfast. We tried The Three Broomsticks, but found the breakfast to be over-priced for the amount of food offered. We walked around to the front of the park for a cheaper option, and hopped on a few rides in other sections along the way. 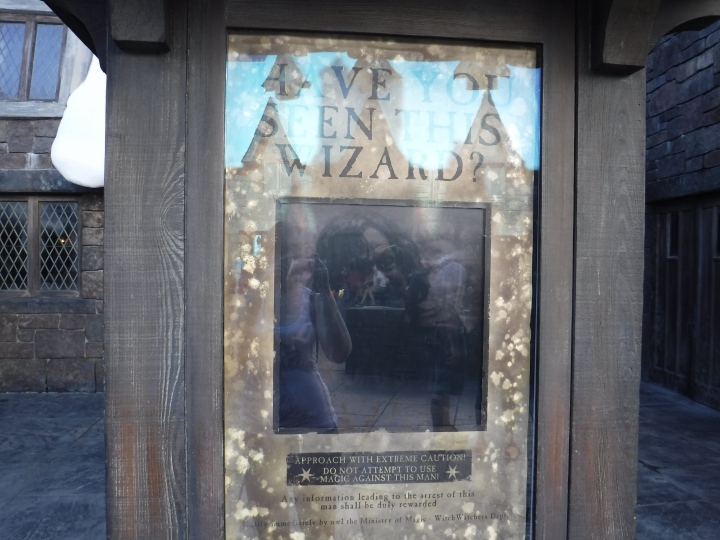 Eventually we returned to Hogsmeade and had a wonderful (slightly later) lunch at The Three Broomsticks, which matched The Leaky Cauldron in terms of tasty food.

For a break from Butterbeer, we tried out an alcoholic option at The Hog’s Head. Even if you choose not to purchase anything from there, I strongly suggest looking in. Once again, I was captivated by the amount of detail and design that went into bringing these locations to life. 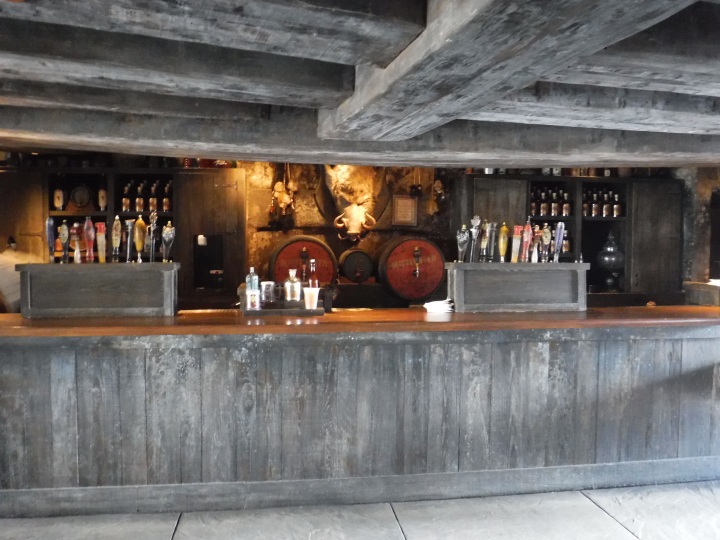 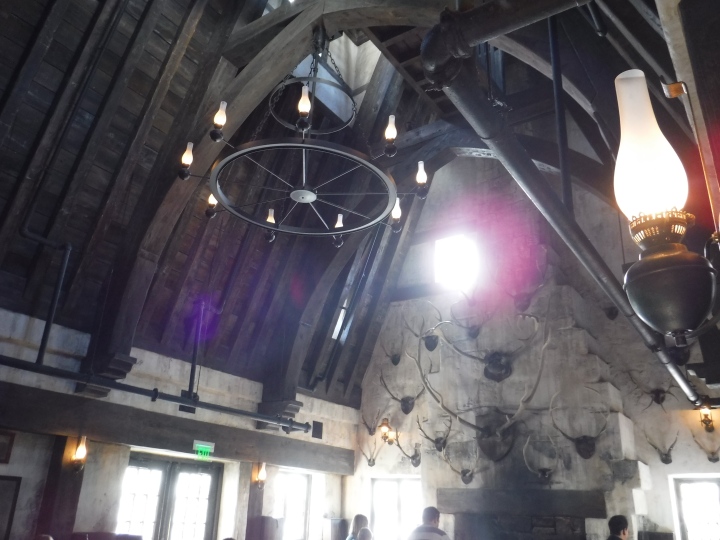 Even though you can only enter about half of the stores in Hogsmeade, it’s still worth peering through the windows. As with Diagon Alley, they have spots along the ground where you can wave your interactive wand ($45 USD at the time of our visit) to cause some magic to happen. 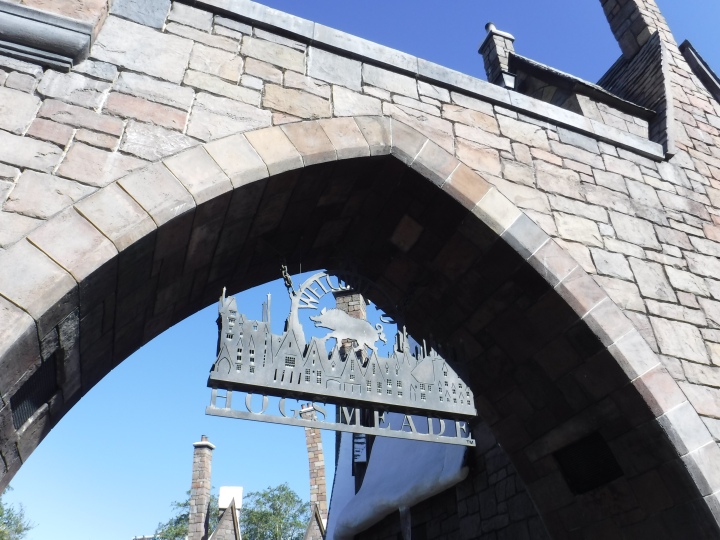 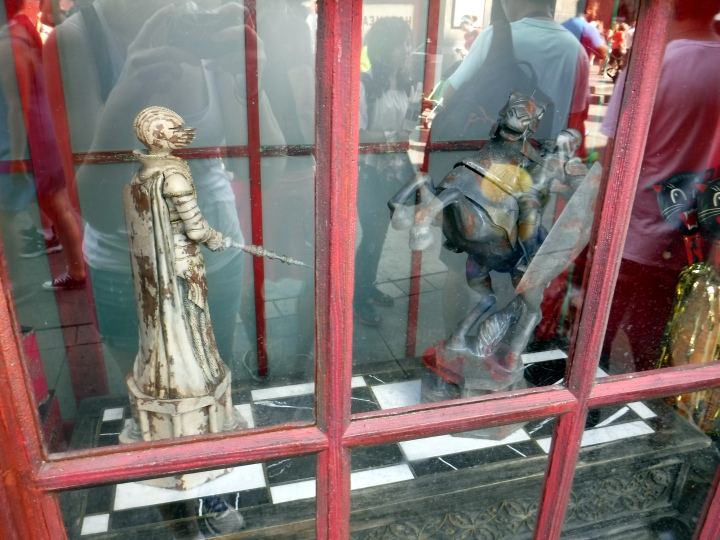 Of the stores you can enter, however, one of my favorites was Honeydukes. If you have any sort of degree of sweet tooth, this is the place for you. I tried not to be too indulgent, as I wanted a few souvenirs which could be a more permanent reminder of my visit, but it was impossible to leave without purchasing at least a little bit of candy.

The bright colors matched the sweetness of the candy, and we spent far longer in Honeydukes than we probably should have. 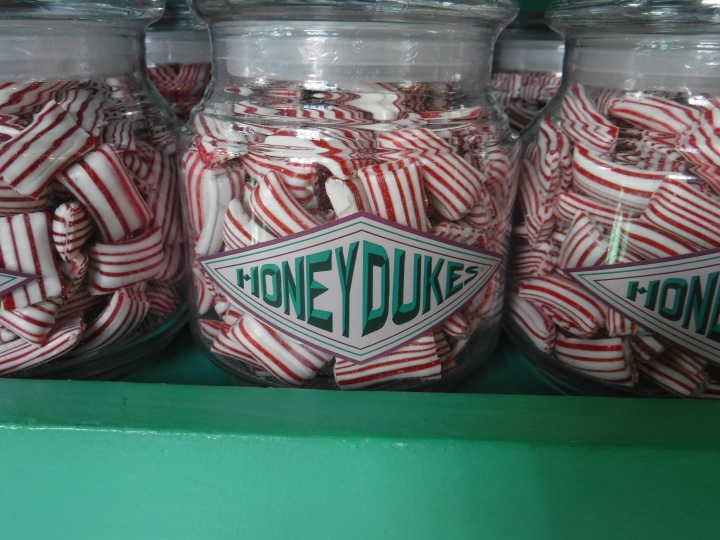 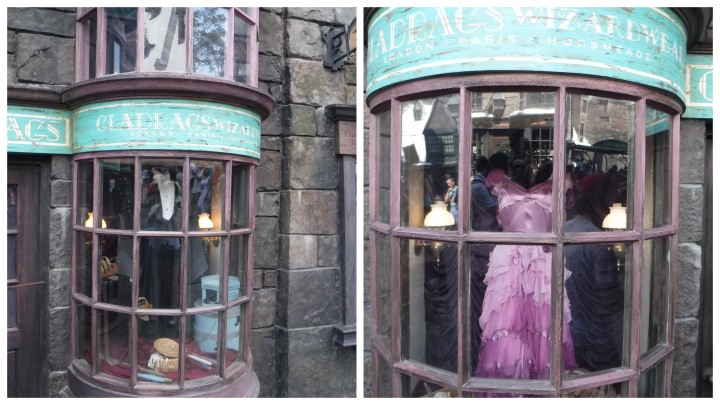 Much of our day was spent lazily wandering from window to window, from shop to shop, admiring everything. Although we didn’t purchase an interactive wand, we watched nearby as others activated the spots. One of my favorites was the cake pictured below. When activated with a wand, the snowman would twirl around atop it. 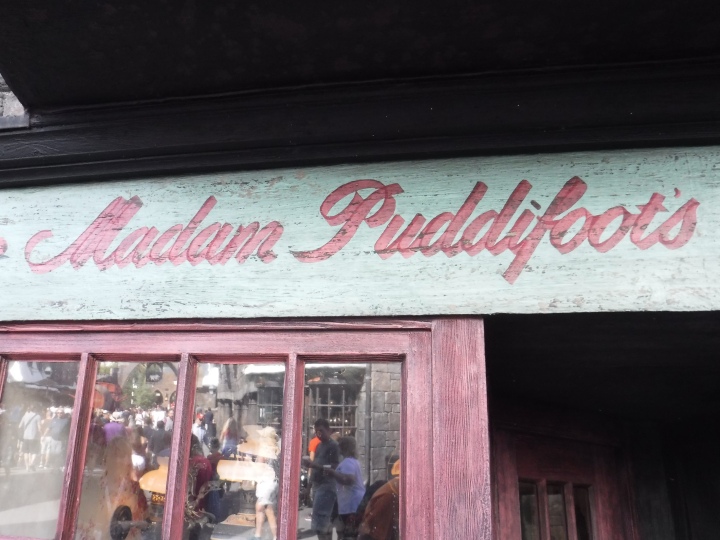 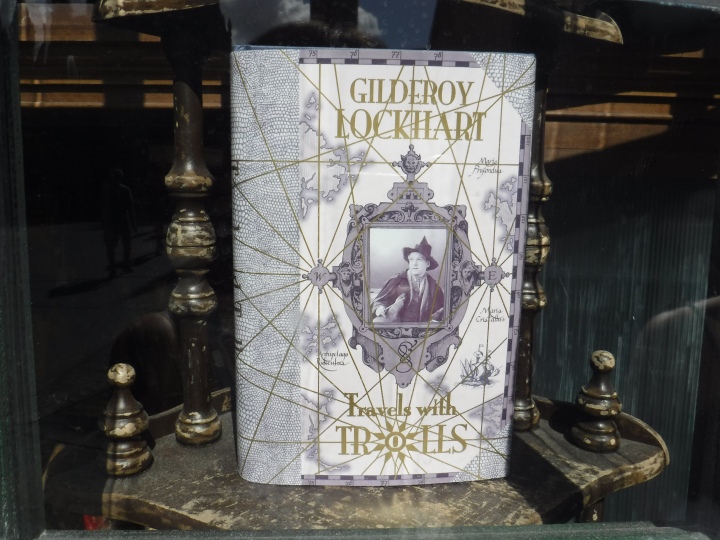 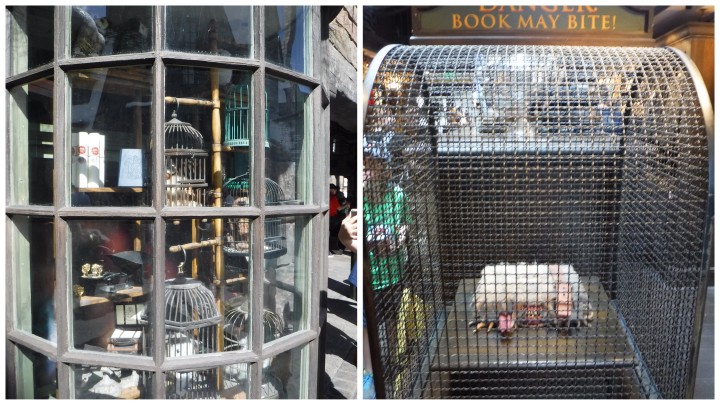 There were plenty of moving things which didn’t require wands, however. The Monster Book of Monsters snaps and growls and scuttles around its cage, while the owls observe their surroundings with wide, blinking eyes, and subtle turns of the head. 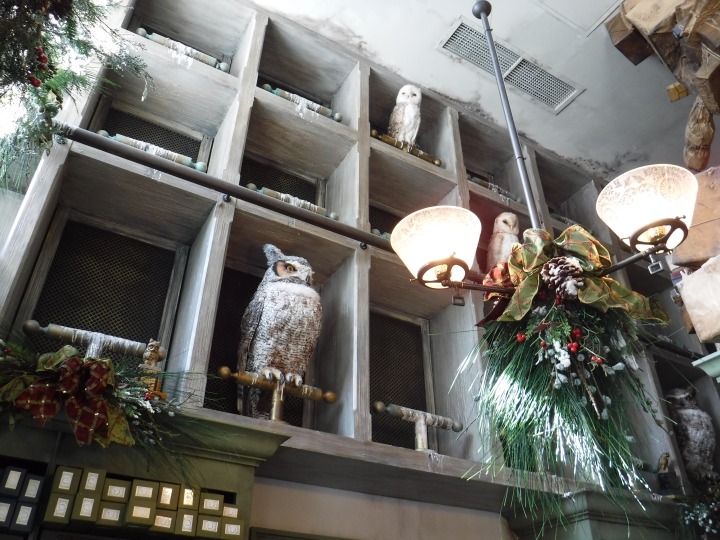 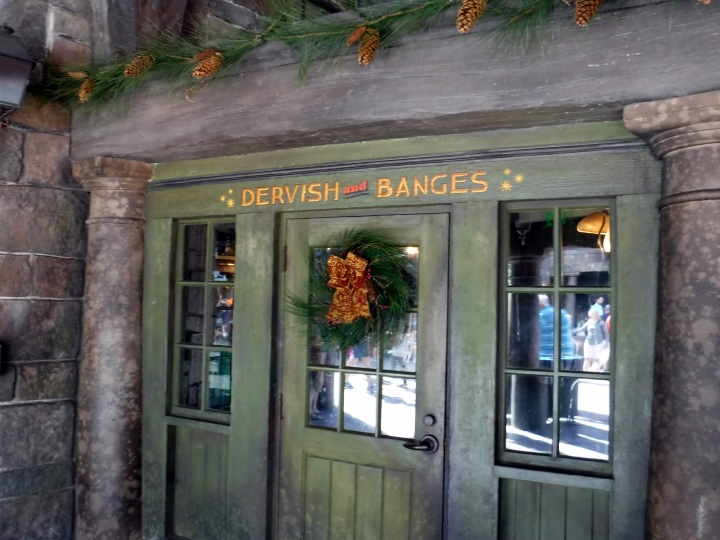 From the most die-hard fans to the casual appreciators, Hogsmeade had something for everyone.

As night approached, we hopped on the Hogwarts Express back to Diagon Alley to see the Hogwarts Express animations in the other direction, and to purchase an item we didn’t see in Hogsmeade. Most importantly, we had to say good bye to Diagon Alley. It should probably embarrass me to admit how hard it was to say good bye, but when it comes to Harry Potter, I have no shame. 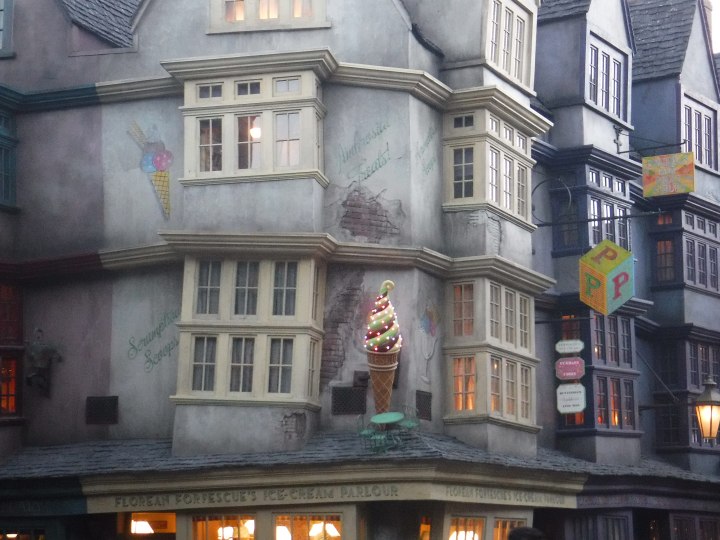 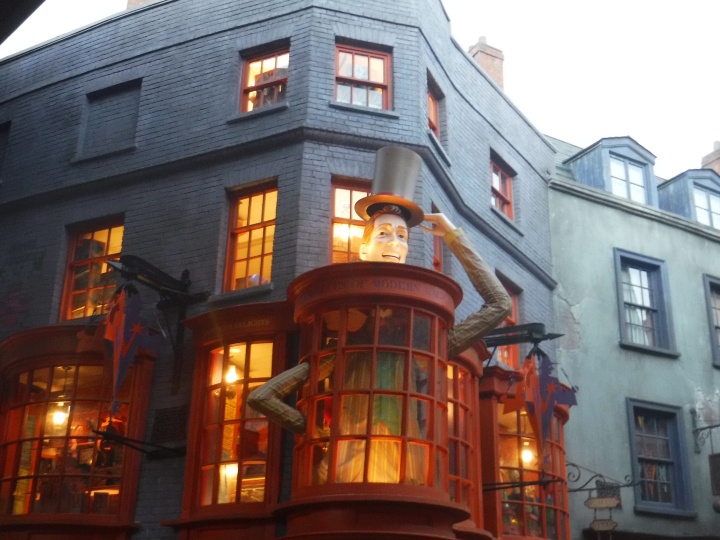 Seeing all the buildings lit up only increased my love for Diagon Alley. They truly created something special through these parks, and I know I’ll be heading back the first chance I get.

We walked through the gateway to Platform 9 3/4 to head back to Hogsmeade one last time, and I captured first a video and then a picture of the passage. From directly on as you’re approaching it, it doesn’t look like anything special, so to get the full experience, watch from the side as others pass through. 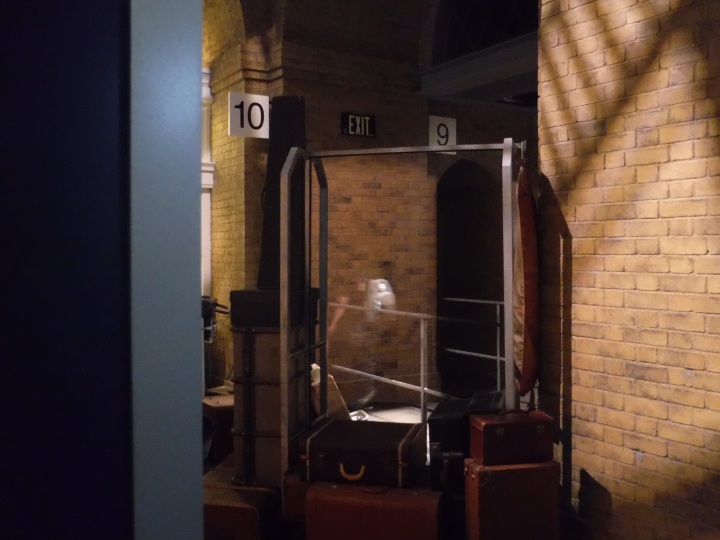 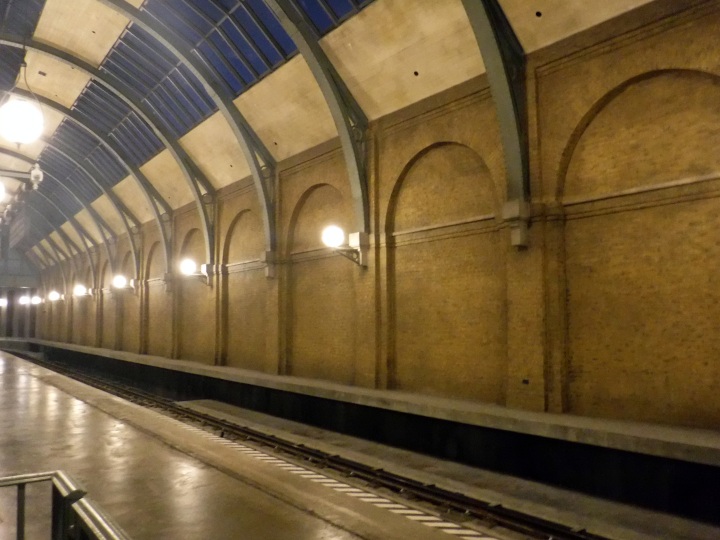 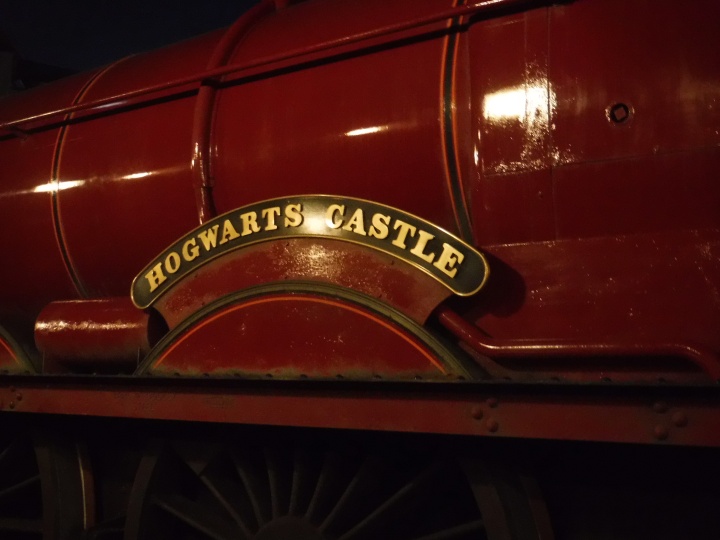 With a last, lingering look at Hogwarts, and plenty of silent, awe-inspired thoughts, we said good bye to the castle, and toasted it with one final frozen Butterbeer. This was one of my favorite trips I have ever been on, and it was emotional to see it come to a close. Until next time, Hogwarts.

Have you been to The Wizarding World of Harry Potter? If so, did you prefer Diagon Alley or Hogsmeade?