For as long as I can remember, books have played a huge role in my life and in who I am. I could read before the age of 3, and to this day, escaping through words into a world of imagination and adventure is one of my favorite ways to pass the time. I have loved just about every book I have ever come across, but one series in particular stole my heart from the moment I opened the first book – the Harry Potter series.

My dad was the first to introduce me to this series, having bought me the first book about a week after its release. I fell in love with it instantly. Luckily for me, my cousin Leah shares that love, so we began planning a trip to Universal. Eventually – after eight years – we made it! After our cruise, we had one full day at my dad’s place before Brit flew home, and Leah – who had flown down a few days before – and I drove the 3 hours to Orlando.

Wanting to make this the trip of a lifetime after so many years planning and longing, we decided to stay at one of the three resorts on Universal property. This way, we got our Express Passes included in our room rate, and we were so close we could walk to the parks.

Upon our arrival in Orlando, we checked into the stunning Loews Royal Pacific Resort.

We didn’t stay long, as we were too excited to set out and explore the park.

The hotel itself was incredibly stunning. It was great for a one time stay, but in all honesty, I can’t recommend it. It was pricey, and we were bummed to learn that it didn’t even include a complimentary breakfast. None of the on-site restaurants were included in the price, either. I know it’s a small thing to complain about, but I want to warn you just in case!

Complaints about prices aside, the resort is stunning, particularly the grounds. As the resort is located on Universal property, we opted to walk to the park, beginning with crossing over a covered bridge. For those who prefer not to walk, there are boats that frequently pass between the parks and each resort – just make sure you board the correct boat when returning to your hotel. 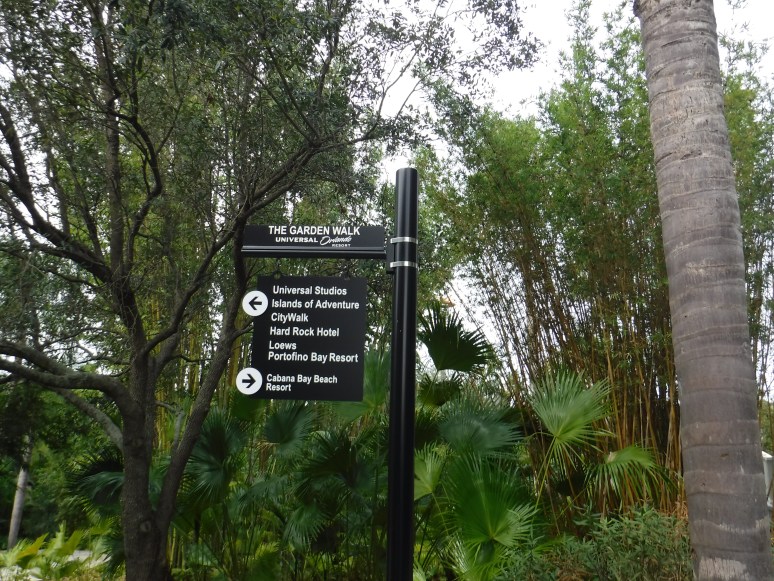 After just under ten minutes’ walk, we arrived at our destination, hampered only slightly in that I first took us into the wrong park. We purchased the 2 Day Hopper Park Pass, which is the only way you can travel by the Hogwarts Express train from Diagon Alley to Hogsmeade and vice versa. We accidentally entered Islands of Adventure, home to Hogsmeade, when in reality we wanted to start our day with the original Universal Studios, home to Diagon Alley. 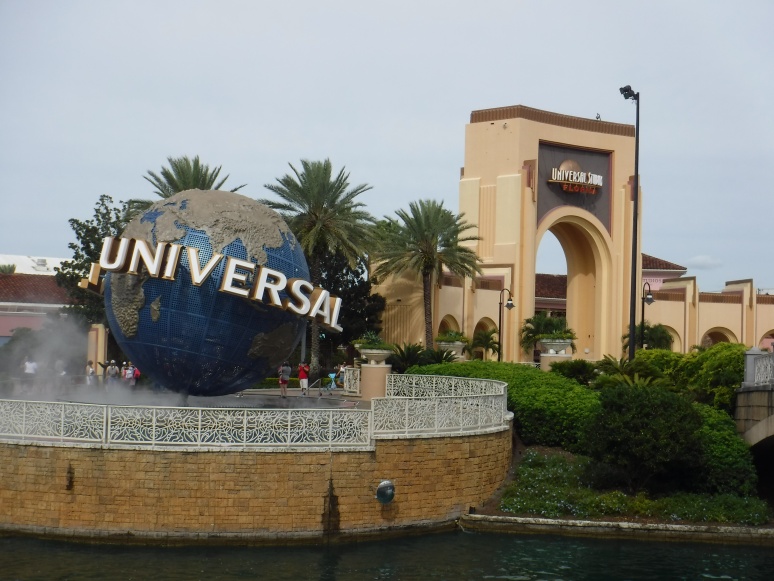 At last we had arrived at the iconic entrance to the park! Since we had express passes, we hopped onto the rides we passed along the way, such as ET and Men in Black. The park seemed fairly empty – spoiler alert: everyone seemed to be in the Wizarding World section – so we barely waited. Even if we didn’t have the express passes, we would have flown through the lines.

Eventually, our eyes caught sight of 12 Grimmauld Place, and my heart began beating wildly. I felt a huge amount of nervous excitement at the full realization that I was about to get as close to experiencing the real (fictional) Harry Potter world as I could. 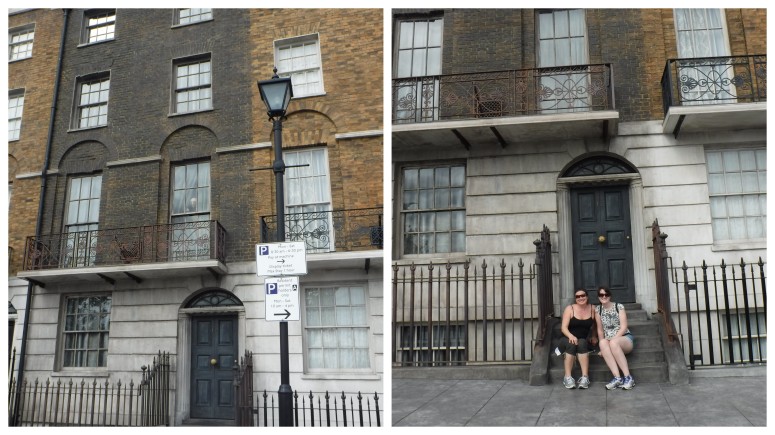 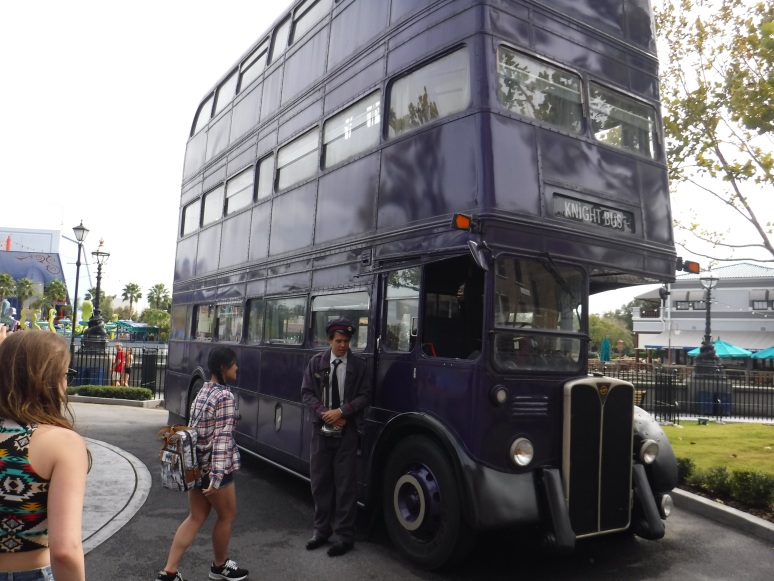 Suddenly, we were through the bricks and entering Diagon Alley, and I was having difficulty finding words to describe all the emotions I was feeling. I know – nerd alert, right?

I’m not exaggerating when I say my heart was still racing, my eyes were blinking back tears, and I was feeling incredibly overwhelmed (in the best sort of way). Leah and I didn’t move from our initial spot for several minutes, too flabbergasted to do more than look around with our mouths hanging open. 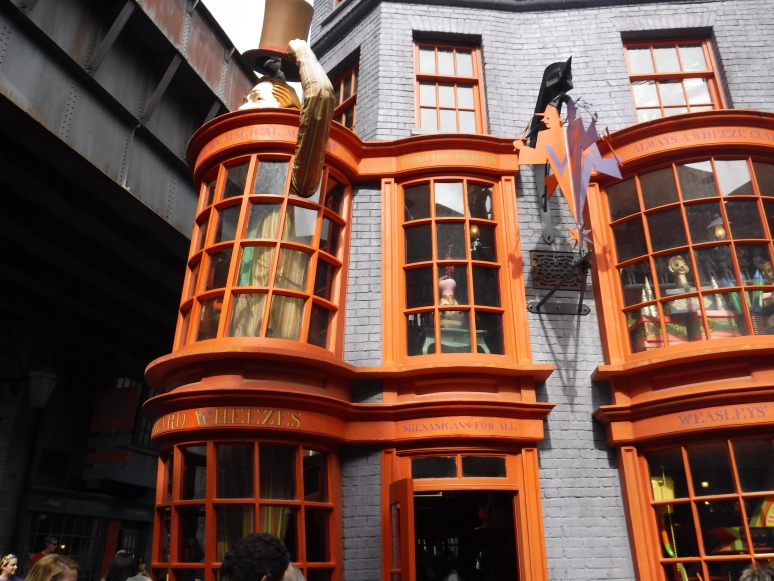 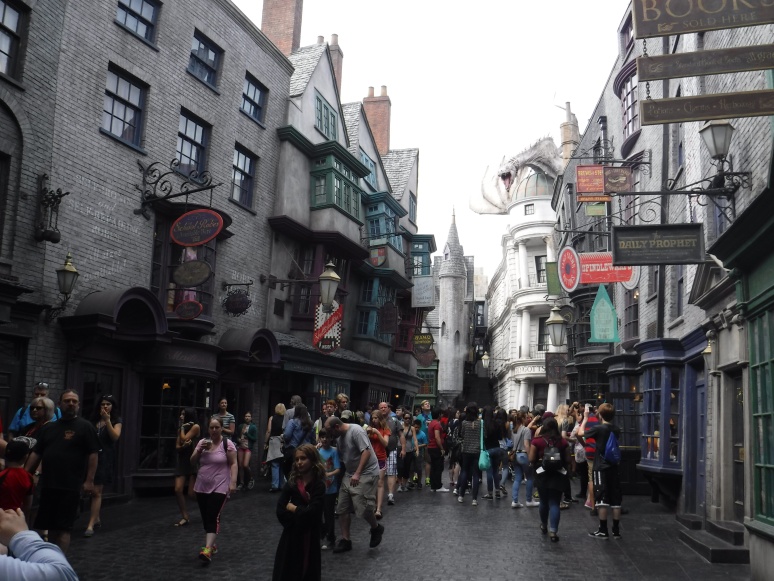 One thing I couldn’t get over was the amount of detail that went into everything. From the towering buildings to the window shops, everything was designed carefully to bring the wizarding world to life. 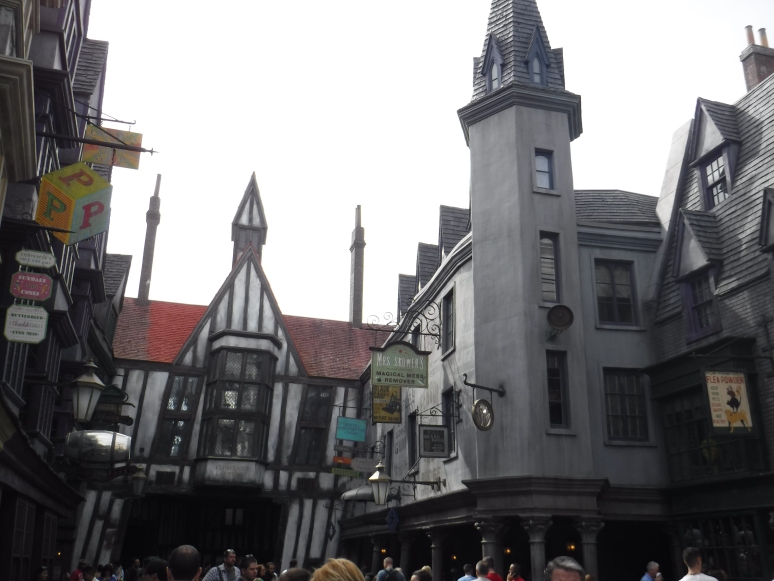 We ate at The Leaky Cauldron, and the food was as delicious as the atmosphere was fabulous. The prices were about what I expected of a popular theme park, but the taste definitely surprised me. Here was where I tried Butterbeer for the first time as well, and I was instantly hooked (although my true obsession, as I discovered shortly after, is the frozen Butterbeer). 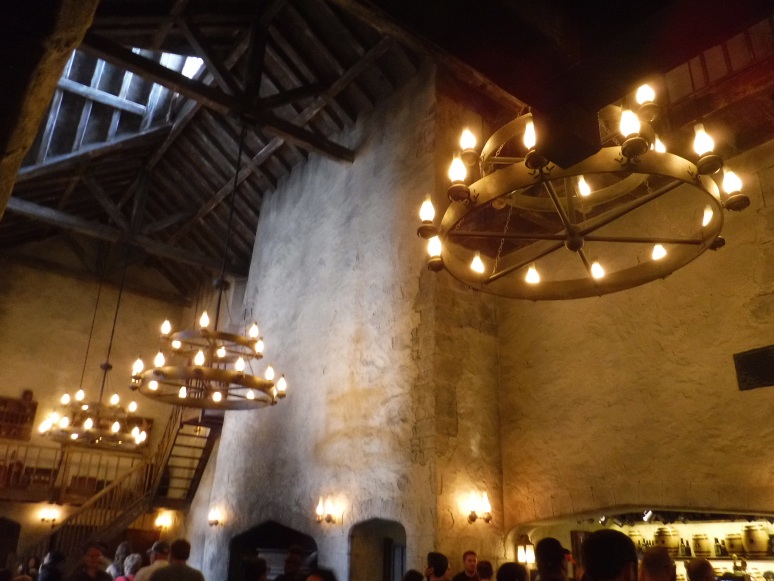 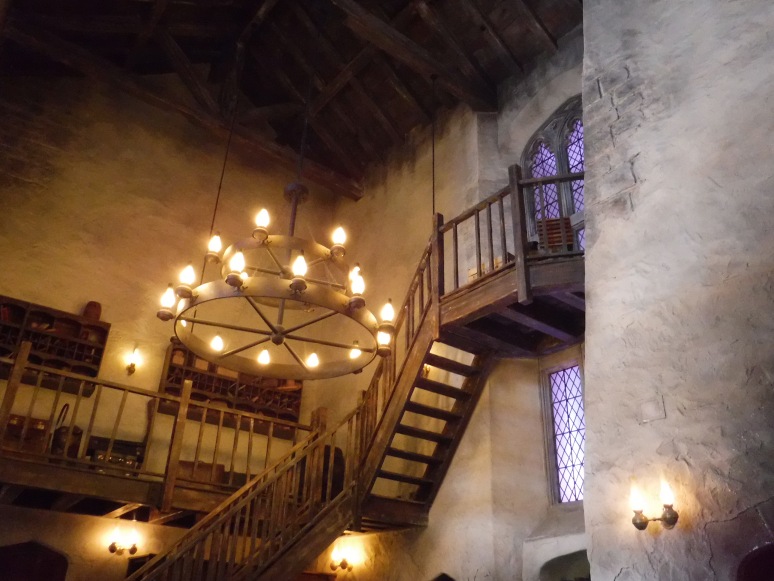 Most of our day was spent wandering around the area, ducking into every shop and building we could. I highly recommend that you look upwards in each building, because it seems as though every corner is perfectly designed and decorated.

Eventually we jumped in line to ride Escape from Gringotts. It was thrilling and awesome, and I highly suggest you go through at least twice – once in the regular line and once in the singles line – just to see everything possible. 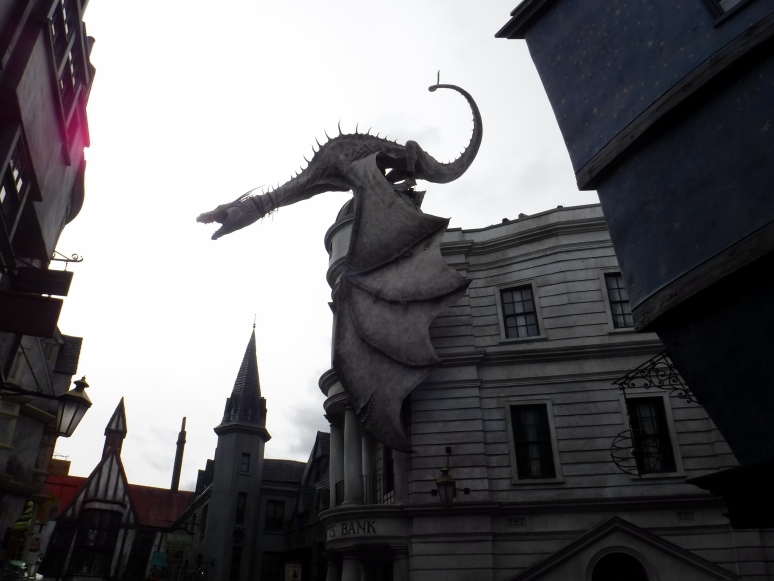 We lucked into the perfect timing to see a performance of The Tale of the Three Brothers. This probably won’t be a surprise at this point, but I was impressed by it. The story was narrated as others moved the characters about, or – in the case of the third brother near the end – became the characters. It was well worth a watch. 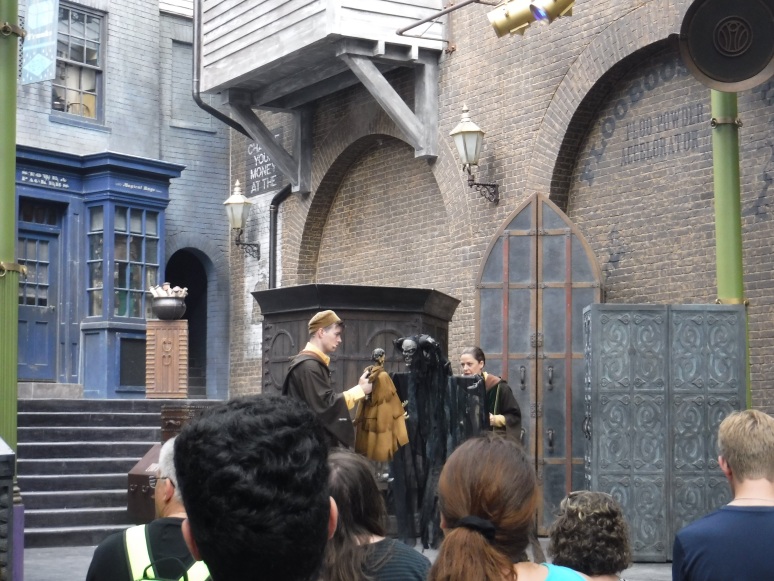 Although we didn’t enter the stores in any order of preference – instead, we sort of did a circle – I was incredibly excited to enter Fred & George’s store. As with everywhere else, it took most of its design from the movies, but I wasn’t about to complain. Although you couldn’t go upstairs, even the upper levels were laden with tricks and games worthy of the twins.

Ollivander’s store was another that didn’t disappoint. I mean, look at their shelves!

The disappointing thing about Ollivander’s is that only one person per group gets to experience the wand choosing. Only a handful of people are let in at a time, and only the first in line gets to experience it. This came as a surprise, as I had been under the impression anyone who wanted could do it. In hindsight, I can understand why this practice is in place, but it still bummed both Leah and I out that we didn’t get to do it.

We came across the darkened passage for Knockturn Alley, and I was instantly intrigued. Everywhere in that section is appropriately dark and gloomy, and it created the perfect atmosphere for a place full of dark objects. 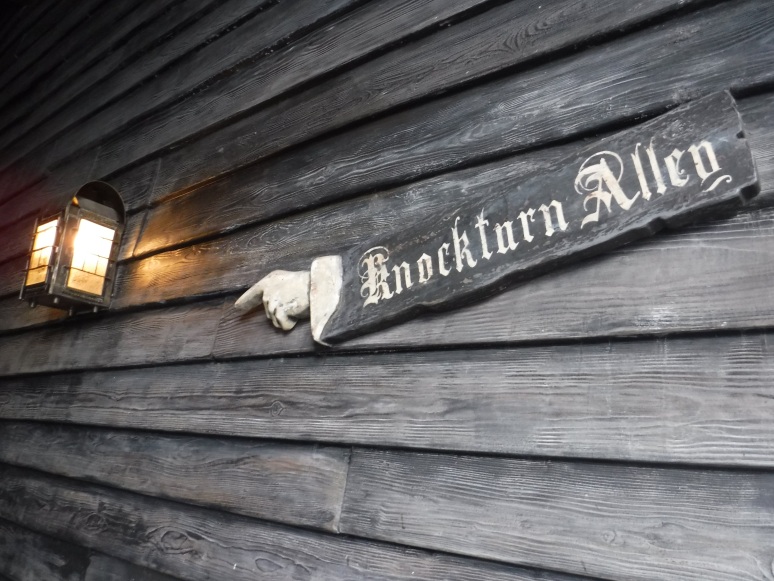 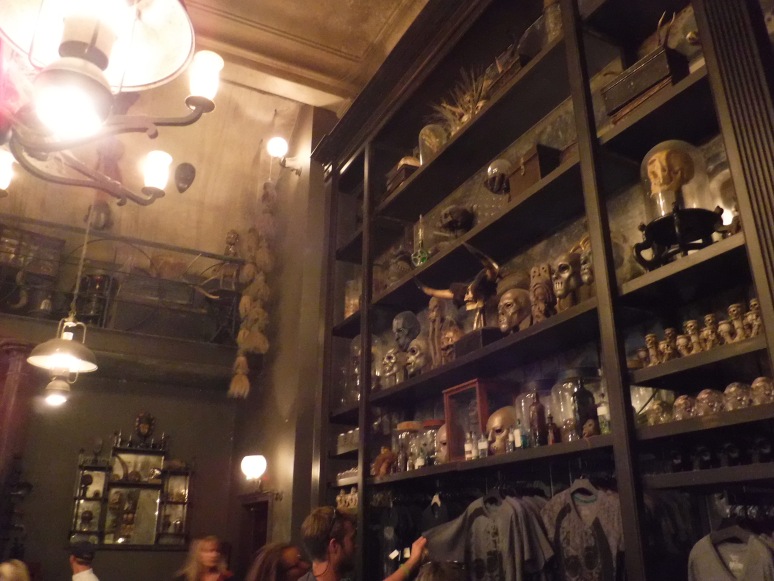 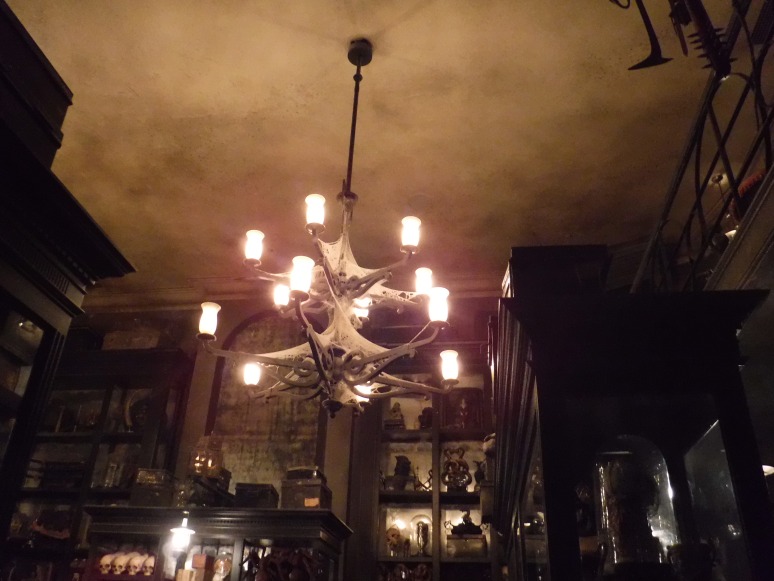 We had one last major ride to experience before we closed the park and called it a night – the Hogwarts Express. The whole reason we chose the 2 day hopper pass was so that we could take the train (this ticket is the ONLY way you are allowed on). We were under the impression it was a simple train with a view of the parks as you passed from one to the other… until we saw signs warning that it was a motion ride. 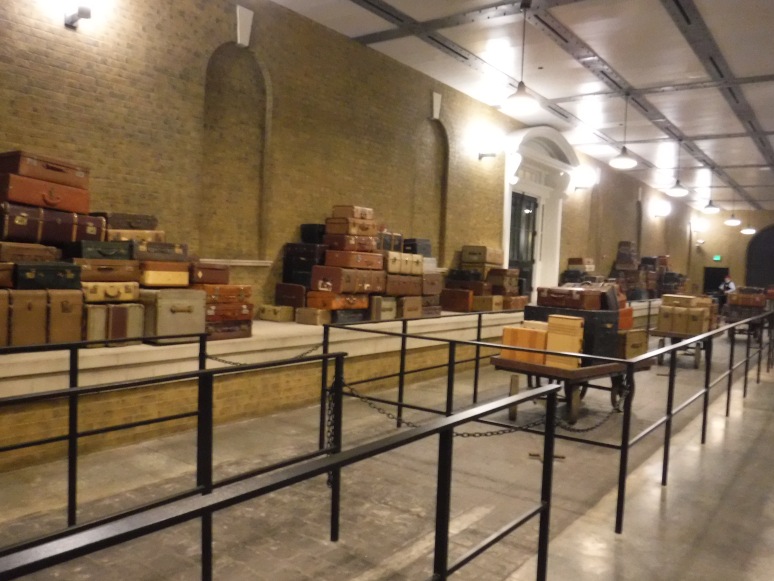 This extra ride was worth every penny of the slightly increased ticket cost. Make sure you take the train each way, as each direction has its own experiences. The things you see out the window and through the “fogged” train doors mimics certain things that occurred in the books and movies. I don’t want to give away too much, but I would absolutely recommend it.

Once we reached the other park, we walked through Hogsmeade and entered Hogwarts to ride The Forbidden Journey – but more on that soon!

I loved our first day immersed in the wizarding world, and couldn’t wait for our second day. Stay tuned!

3 thoughts on “Diagon Alley: A Magical Experience – Day One”