In 2010, I turned 21, and wanted to celebrate in a big way. It didn’t mean as much to me living in Canada as it would in the US – drinking age is 19 in Ontario – but it still felt like a milestone to be celebrated. Coincidentally, Brit and I had been talking about a potential trip to Las Vegas. Just over a week after my 21st birthday, we set out for a 3 night trip to Vegas! 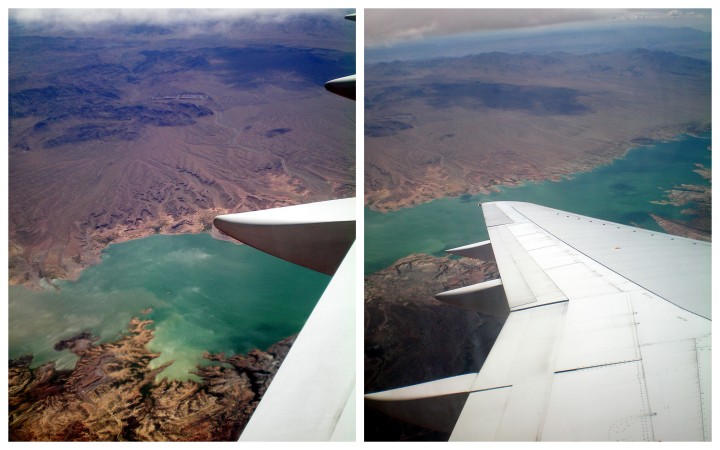 During the planning stage of our trip, Brit had asked me if I had a preference for where we stayed. We both wanted to stay on the Strip – after all, what if this ended up being our only trip to Vegas? – and with my fascination for pirates, I had to choose Treasure Island.

Being the incredibly excited and intelligent people we are, we just knew that starting off our trip by watching The Hangover the night before we left was the perfect thing to do. As if it wasn’t bad enough that we started the movie late, we chose the extended version, even knowing our flight was at 6:30 am. Still, we made it, awake and happy, and were rewarded with our first view of the Strip from the airport tarmac. 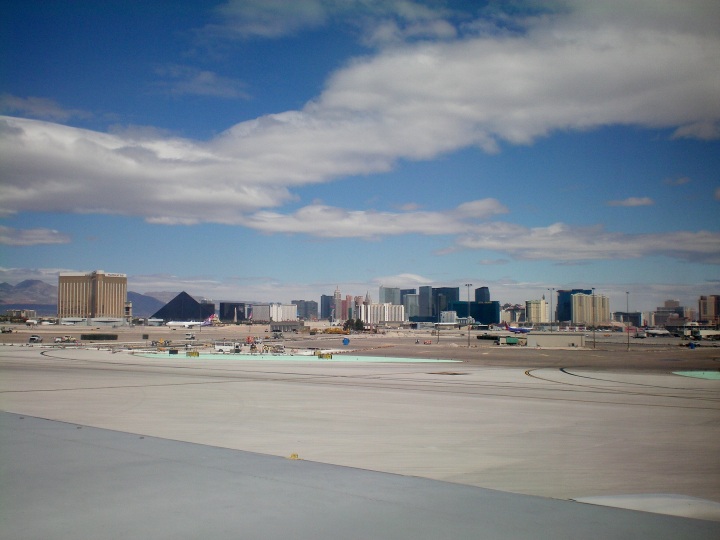 From the second you step into the airport, you know exactly what city you’re in. Row after row of slot machines are the first noises you hear, and even though I’m not a big gambler, my level of excitement shot way up. 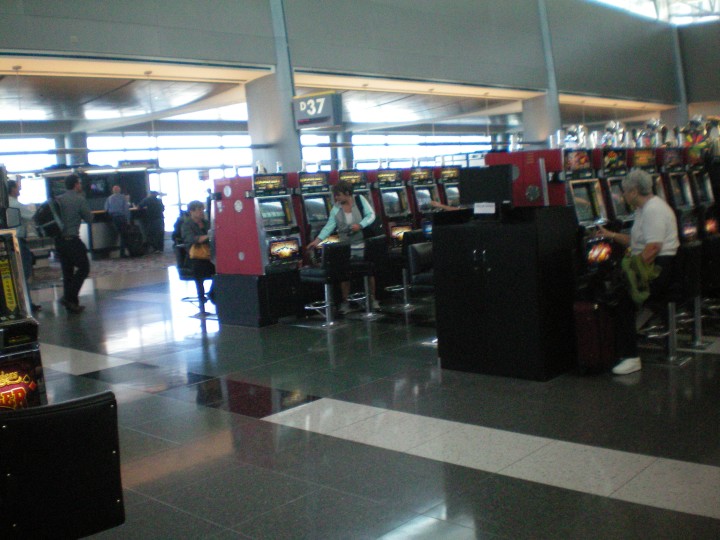 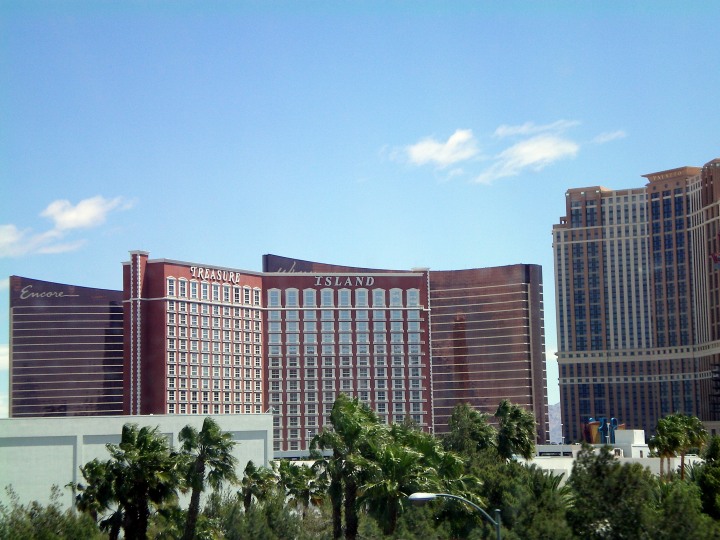 After experiencing a harrowing cab ride – it felt like he was training for the Indy 500! – and checking in at Treasure Island, we decided the proper thing to do was to walk the Strip. Yup, that’s right. Running off of 3 hours of sleep, in quite warm weather, we walked all the way from Treasure Island down to the Luxor, a distance of roughly 3.5 km. It didn’t help that we were so enamored of our surroundings that we frequently paused to take pictures and look around. 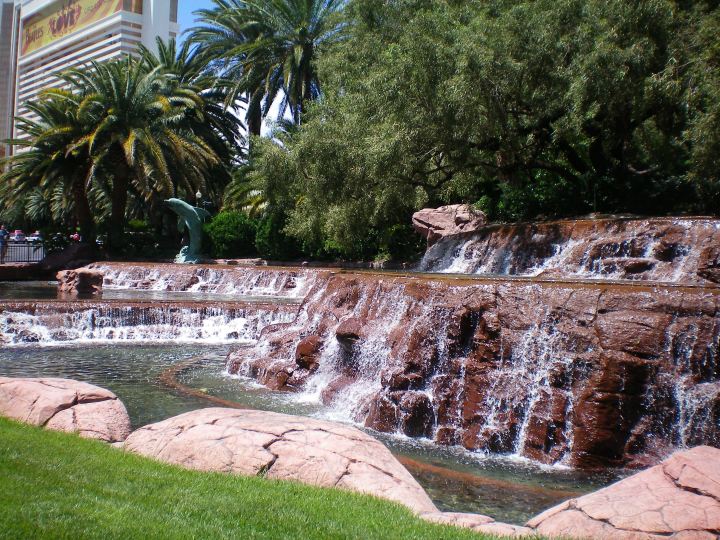 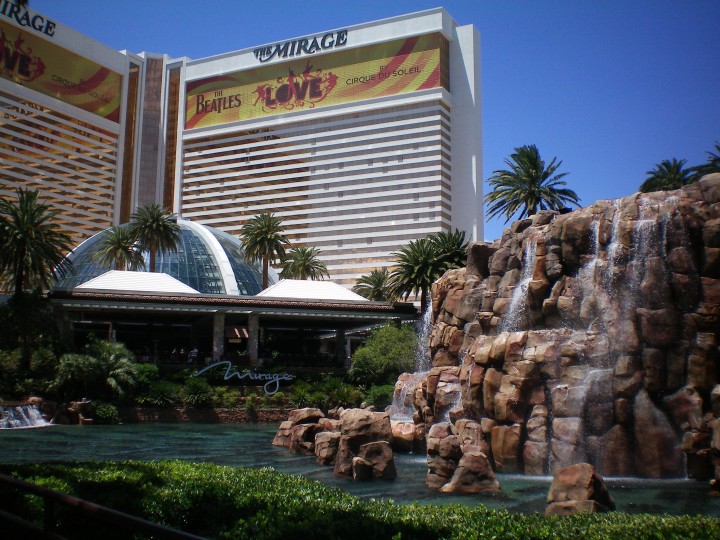 The Mirage has a volcano (pictured above) which erupts several times a night, beginning in the early evening. It was quite impressive, actually, particularly considering it’s free. I don’t know about you, but I try my best not to pass up on free things! 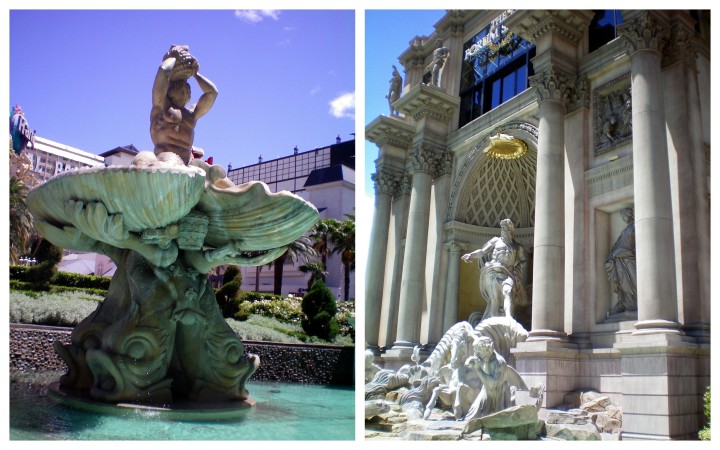 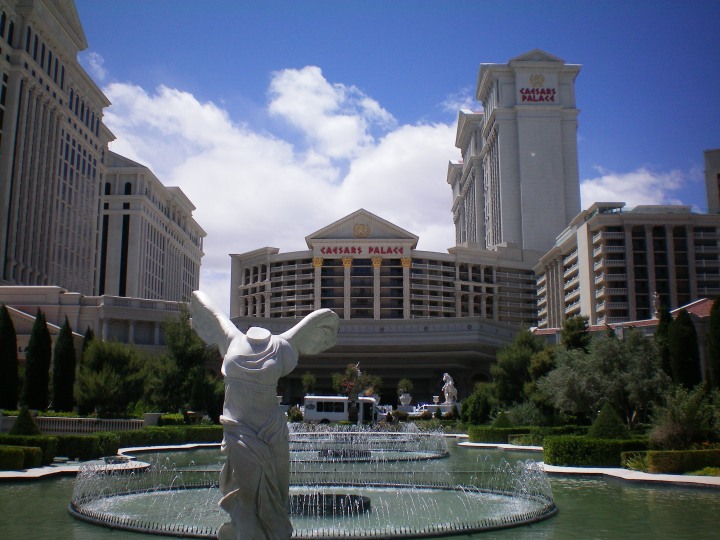 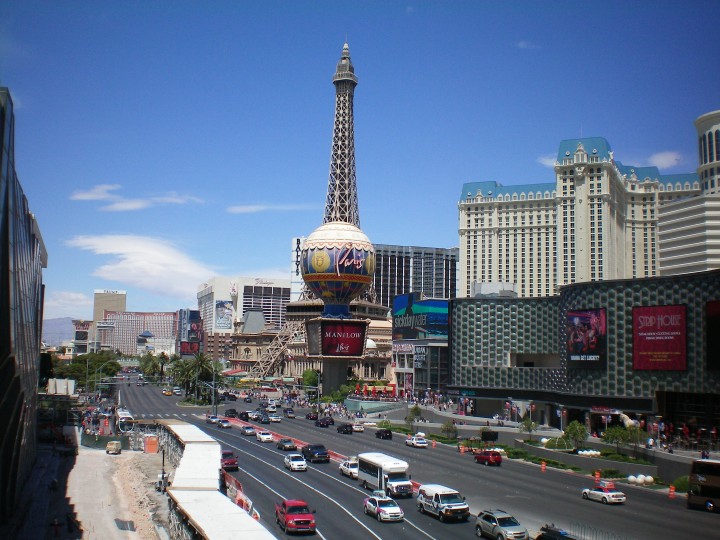 The Strip continued to delight us, and I found myself quickly falling in love with this city. Our trip was in May, and randomly happened to fall during a time when Vegas was overrun with conferences. This meant that during the day, the Strip felt relatively vacant, but at night there were enough people there to make you feel safe.

Take this with a grain of salt, but I actually felt much safer along the Strip than I had imagined. As long as you keep your wits about you, you’ll be fine. The only time I felt slightly uneasy was when we were trying to get back from the Stratosphere, but more on that soon.

We took this opportunity to check out the Shark Reef at Mandalay Bay. Brit’s boyfriend at the time lent us his video camera, so unfortunately I have zero pictures from our time there, as I was busy filming. Brit and I found a bench in one of the tube hallways and simply sat for a good 20 minutes, watching the sharks and other fish swimming over and around us.

We finished off our first evening in Vegas in the appropriate way – with tickets to one of the shows! There’s no denying that Criss Angel’s Believe show is a wacky blend of Cirque du Soleil and illusion, but it seemed to work well. I certainly enjoyed it enough that it sparked one of my bucket list items – see as many Cirque shows as possible (currently at five)!

By the time we arrived back at our hotel for the night, our feet were on fire and our eyes were barely open after 23 hours awake, but we were both head over heels for sin city.

Have you been to Vegas? Where did you stay?