Every so often, you go to a place where – no matter how crowded, “overrated”, or its tourist-trap status – being there alters something within you, and you experience it on a profoundly deep level. On this trip, it was the Colosseum that made me feel that way more than any other location. 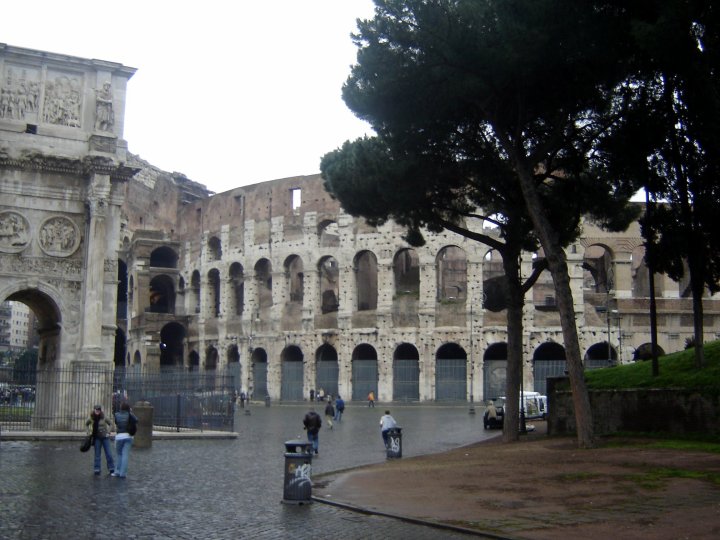 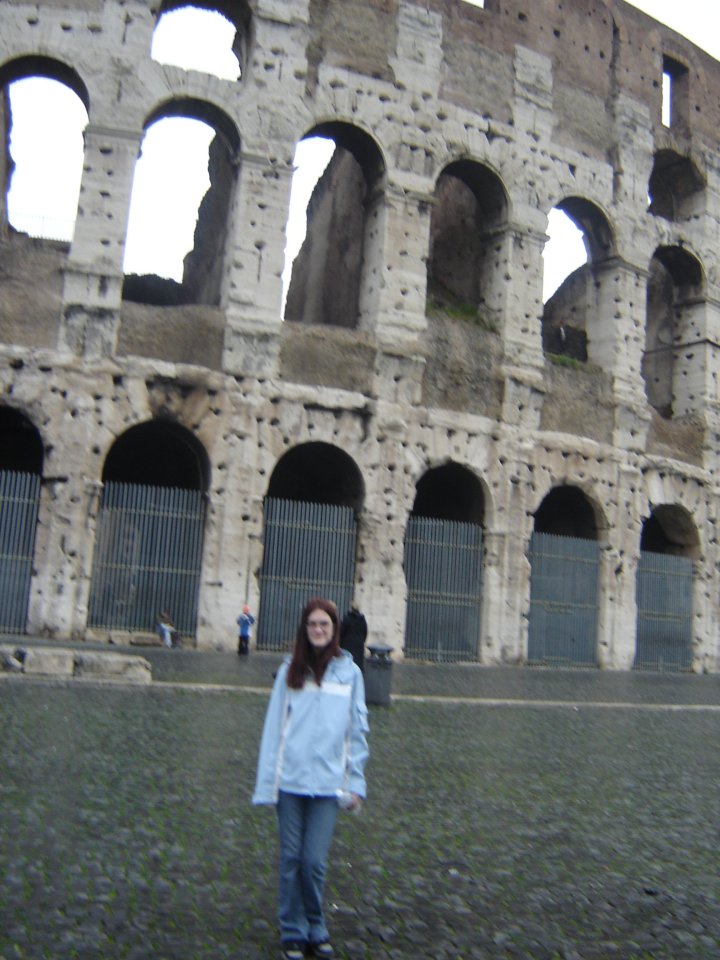 I’m sure this will display my naiveté, but I was legitimately surprised to find how centrally located the Colosseum is. Of course, from an historical standpoint it makes perfect sense, but it felt remarkably out of place to see modern cars whizzing along on paved roads not too far from the Colosseum’s ancient walls.

Upon arrival, we were given whispers, which were walkie-talkie style radios so we could hear the tour guide. The tour only lasted half an hour or so, and then we were given free time. The weather was kind of crappy (misty rain, mostly), but instead of being annoying, it felt like the perfect mood for such an historical location.

Through the tour, we learned just how impressive the Colosseum really is. Aside from being the host location to gladiator fights, the openings were closed over and the Colosseum flooded to have smaller-scale naval battles.

A partial stage has been added to show what the floor would have looked like, but being able to see the labyrinthine passageways below the surface was remarkable. Even seeing that couldn’t beat the chills I had from walking through a set of the original gates. 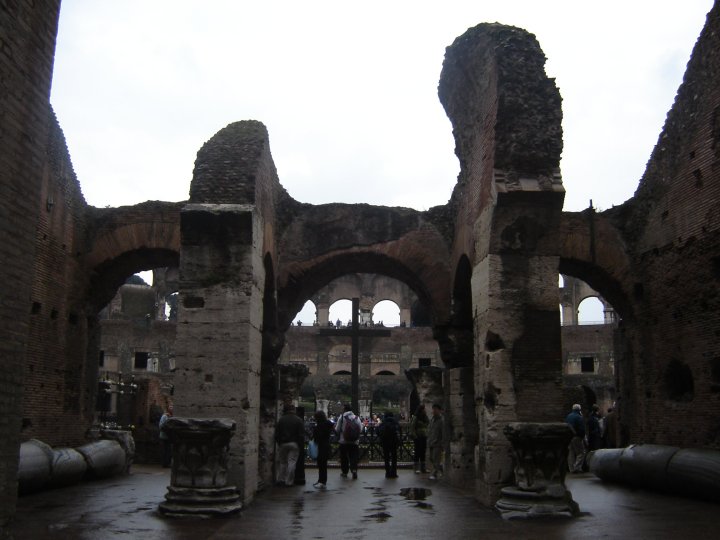 I know in general – myself included – people tend to have a fascination with, or at least are drawn to, macabre locations and events. While the Colosseum, with the thousands upon thousands of animal and human deaths, certainly fits that description, what fascinated me was simply being in an area chalk-full of such history, and being able to walk along the passageways. While I in no way condone the events that played out there, I cannot deny how enthralling it was to see the Colosseum with my own eyes.

Unfortunately for the structure of the building, as the gladiatorial games fell out of favor, so did the building itself. Massive chunks of limestone were removed to use for other buildings, leaving the Colosseum with the iconic silhouette we know today.

Following our time in the Colosseum, our guide Fortuna led us on a brief walking tour. We passed by the Arco di Tito – or Arch of Titus – built in 81 AD on our way to the Roman Forum. 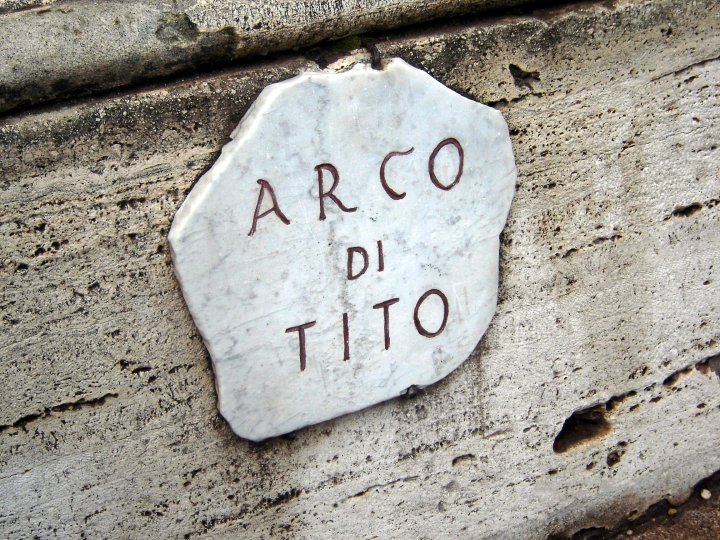 The Roman Forum today is a series of ruins, but in its prime, this was the center of public life in Rome. Along with temples and shops, the Forum was the site of Senate meetings and public speeches. 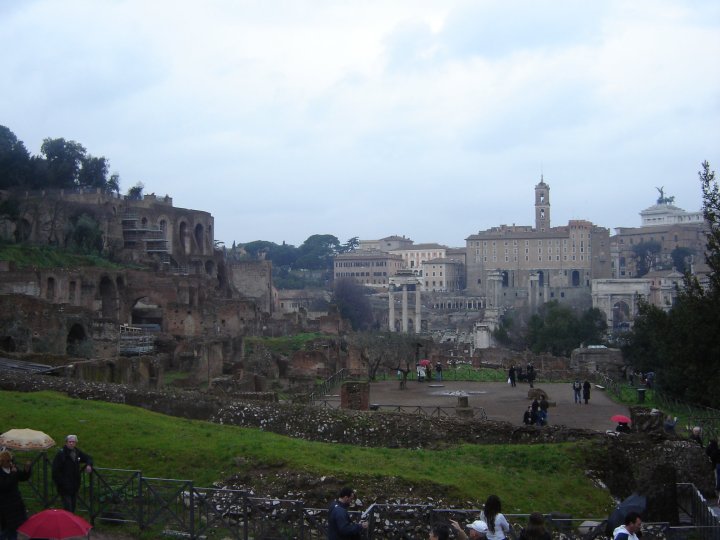 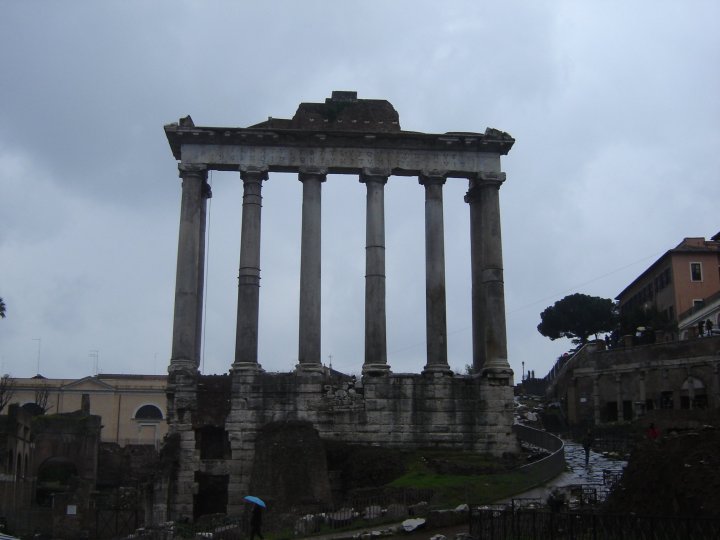 Although somewhat confusing, the Forum was a must-see for me, and I wasn’t disappointed.

Fortuna left us at this point, and the remainder of our afternoon in Rome was spent as free time. Ten of us grabbed lunch, then walked around in the drizzly cold weather. I’ve heard several complaints that Rome is a very confusing city to navigate, but if we had any problems that day, I don’t remember them.

I loved my time in Italy, and really the only downside I can complain of – other than food poisoning, of course – was our awful time in the Frankfurt airport on the return trip to Canada (more of that in my last Italy-related post – coming soon!). Alla prossima, Italy.