One of the best parts of basing ourselves in Stirling for the first half of our time in Scotland is that it meant easy access to several locations we were interested in taking day trips to. Up first: Edinburgh, Scotland’s capital city. 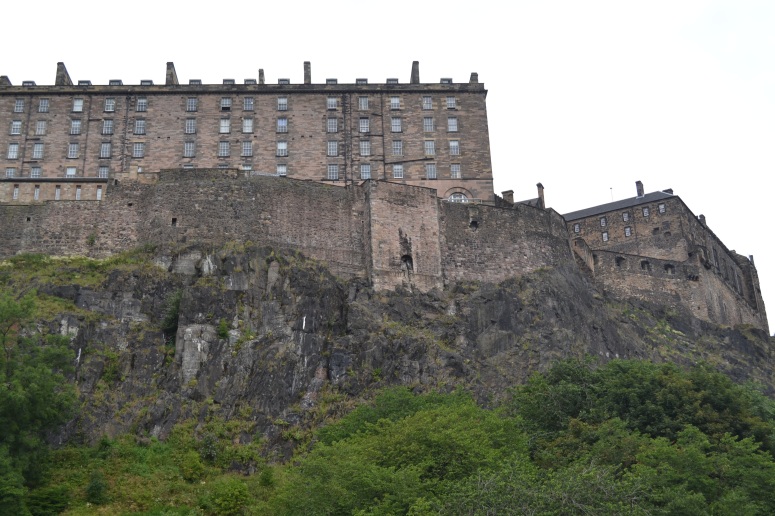 During the initial stage of our planning, we decided not to do both Edinburgh and Glasgow. When it came down to choosing, the vote was unanimous: Edinburgh would be the victor. Driving through the city on our way to the old medieval core, the Edinburgh castle loomed large on the cliff above us, and I knew without a doubt we had made the right choice. The only downside was the protruding seating section, which marred the full beauty of the castle and grounds. I knew ahead of time it was there, but the sight still left a sour feeling.

In the days leading up to our time in Edinburgh, we debated whether we wanted to go inside the castle or not. I had heard from several people that the castle was overpriced and less impressive than Stirling Castle – which already happened to be on our list. Still, we figured since we were there, we may as well.

As it turns out, the choice was made for us. We arrived in Edinburgh around lunchtime, and immediately made our way to the castle. Once there, we met up with my sister’s friend from home – her family vacations in Edinburgh, and the times just so happened to line up! – and tried to enter the castle. The problem? The castle was closed. We watched curiously as the castle was evacuated. Eventually, we overheard some police officers mentioning an abandoned car with no plates had been left near the castle, and as a safety precaution, the area had been cleared. As far as I know, nothing came of it, but we steered clear of the castle, anyway. 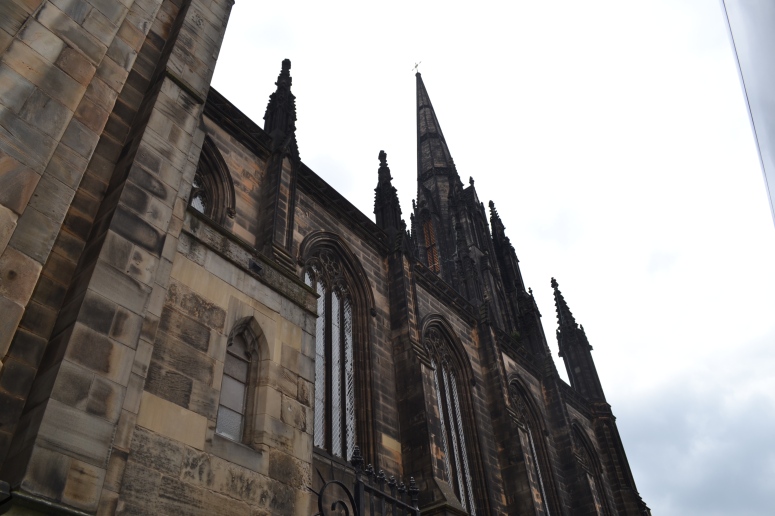 My feelings about Edinburgh remain mixed to this day. Over a month has passed since I visited the city I’d dreamed of seeing for years, and yet I feel a definite sense of lack when I think of the city. Of course, that would probably have something to do with the fact that we stuck to the heavily tourist area of the Royal Mile. We also visited just days before the Fringe Festival was set to begin, so the crowds were insane during the afternoon. The bright side? Eventually, when I make my way back across the pond and visit again, I’ll be sure to have a more authentic, local experience, and that should seal the deal of Edinburgh being one of my favorites.

Once we decided it was no longer worth it to wait around for the castle to reopen, my sister and her friend headed off to do their own thing, and mom and I began to peruse the Mile. 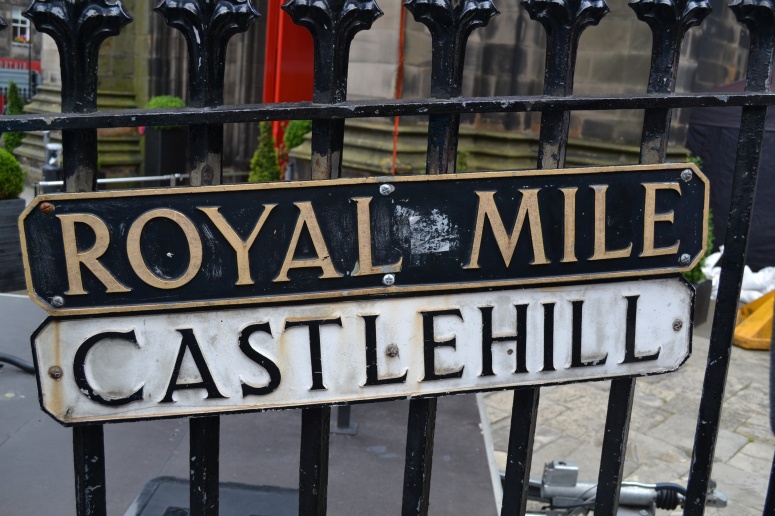 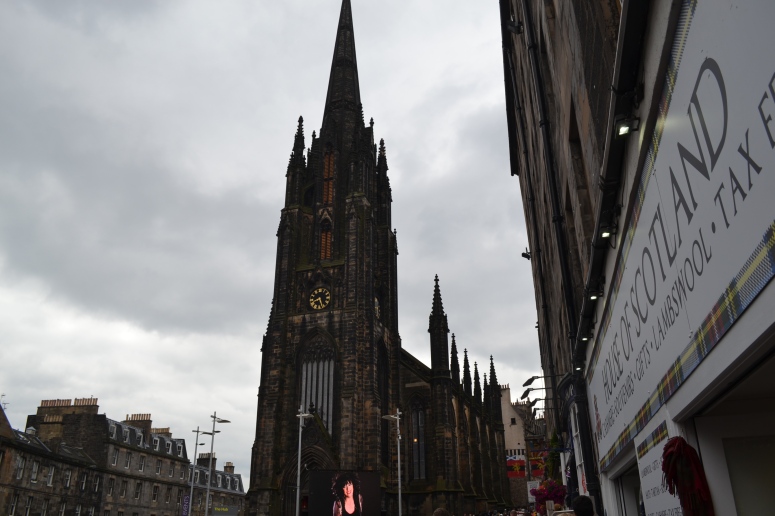 Even with the negative aspects of my feelings regarding the first impression Edinburgh had presented me with, there was one place I fell head over heels in love with: St. Giles’ Cathedral. The cathedral dates back to 1124, and for me, it was an absolute highlight of our entire trip. Of course, the church has evolved over the years, changing from likely a smaller building to closer to what stands today. The size and Gothic style stems from the 1320s, after the previous building was burned down. 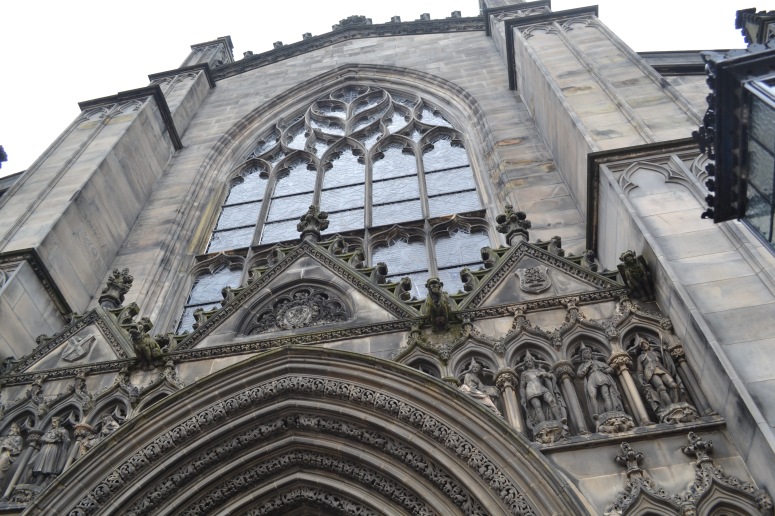 Upon entering, I was about to start snapping pictures – as soon as I could pick my jaw up off the floor, of course – when I noticed a sign stating a photo permit was £2.00. I can safely say that was the easiest and most worthwhile purchase I have ever made. 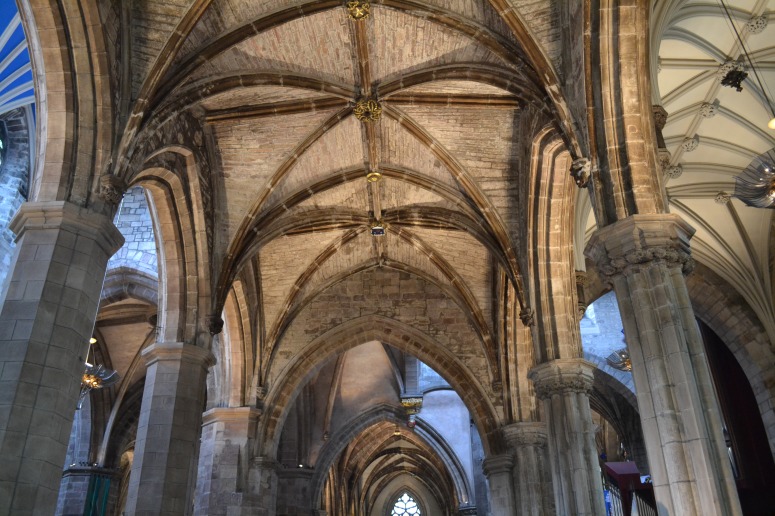 It’s nearly impossible to appropriately describe the overwhelming feelings of peace and awe I experienced while walking around. Mom and I spent ages in the cathedral, taking our time walking around and looking at everything carefully. The cathedral had more stained glass than any cathedral I’d been in yet, and though stained glass would have been present in medieval times, not much of the original survives today. 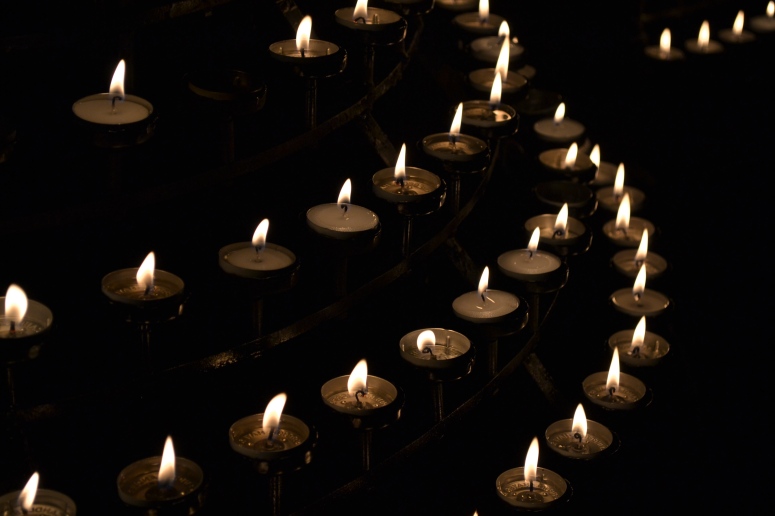 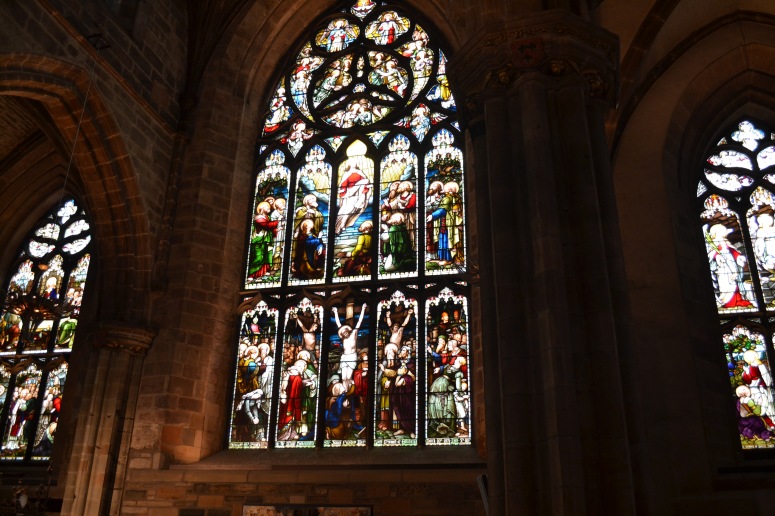 The architecture, the art, the stained glass… it was all very overwhelmingly beautiful. At one point, I sat on a simple wooden seat and stared around, content to simply be.

To one side of the cathedral sits The Thistle Chapel. The Order of the Thistle is the highest honor of chivalry in Scotland, and is given to Scots or people of Scottish ancestry who have given distinguished service. The Thistle Chapel was completed in 1911, and the amount of detail is sobering. 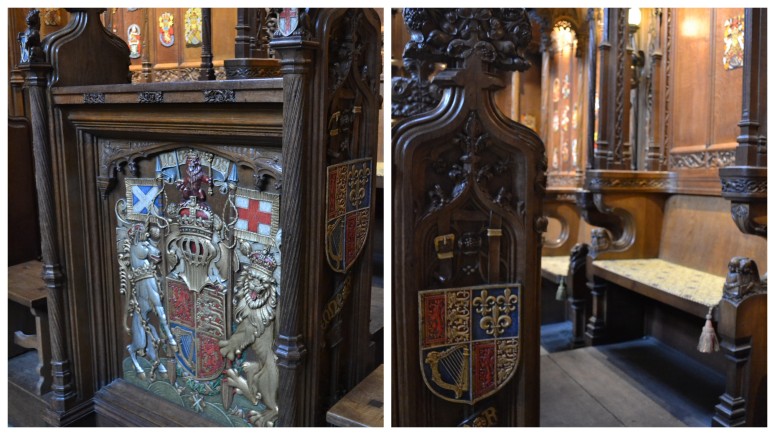 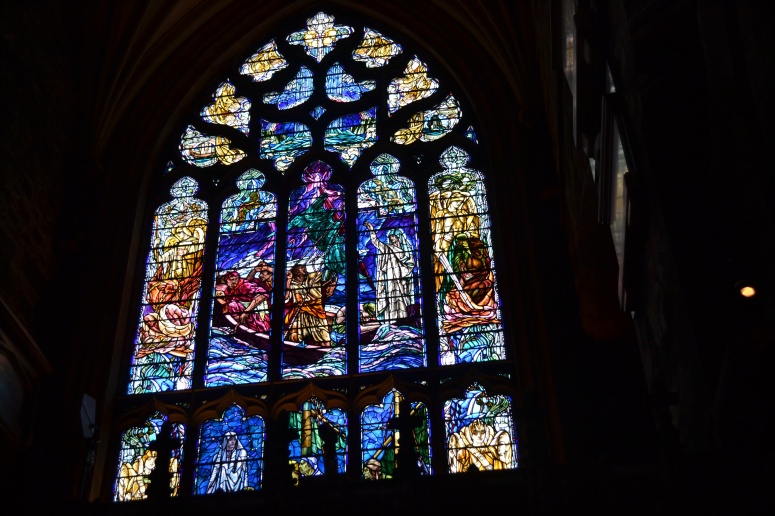 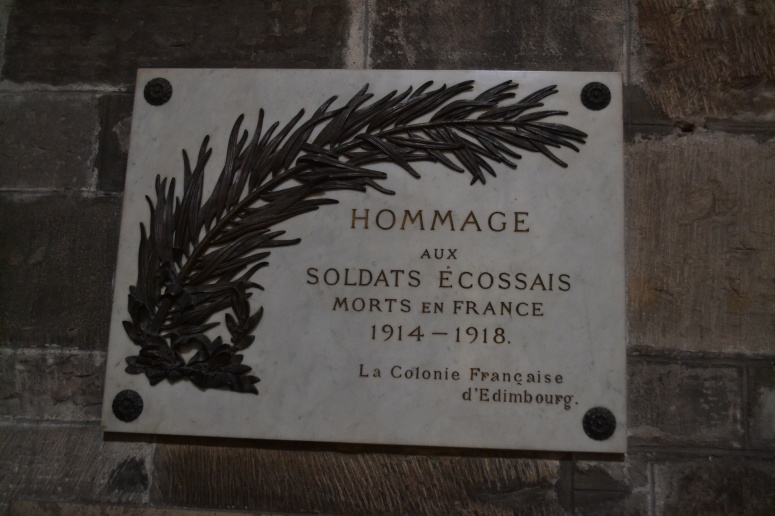 When we had finished our slow trek around the cathedral, we finally made our way back to the outside world, stunned to discover we had spent roughly an hour inside. Over a quick late lunch, we decided to follow up through our ancestry. My aunt has been tracking our family history through the years, but she had reached a point where she was stuck. After asking at the St. Giles’ Cathedral, we made our way to Victoria Street, where you can visit the Scottish Genealogy Society centre and try to look through your past. 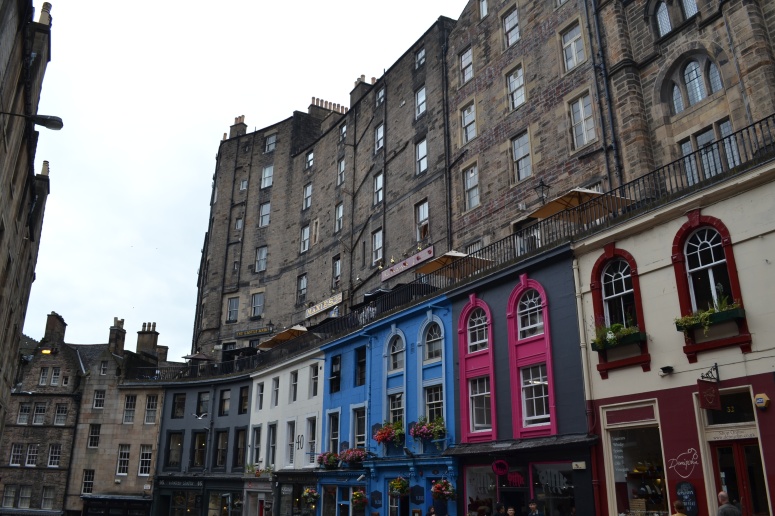 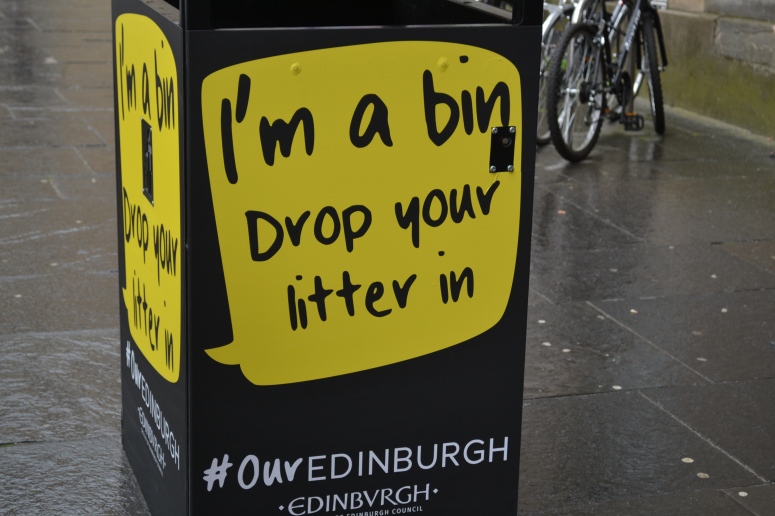 For anyone interested in visiting Edinburgh, let me give you a fair warning about Victoria Street: it has an upper and a lower level. While walking all the way down the street, searching for the genealogy center, I noticed people on the upper level, but thought nothing of it. By the time we neared the bottom of Victoria Street – a hill, to make things worse – we figured we must have missed it, and made our way back up. Alas, it was another 20 minutes before we managed to find it, and that after asking again for directions. If you’re looking for it – and you can’t seem to find it – make your way to the upper level and head almost to the very end. It’s along a close near the end. You’re welcome. 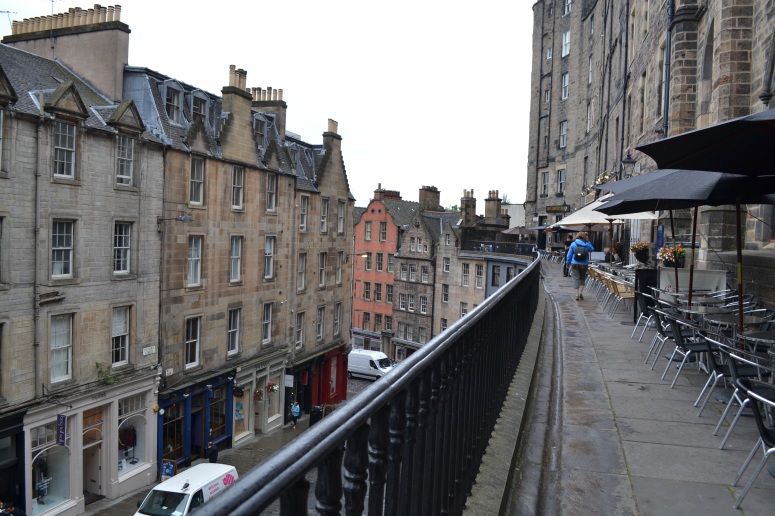 We stayed at the genealogy centre until it closed, then wandered back along the Royal Mile, determined to reach the bottom and see the Palace of Holyroodhouse. Along the way, we dipped into stores, admiring local selections and generally browsing.

When we finally made it to the bottom of the Royal Mile, it was to discover that the gates were closed. We stuck our heads between the bars and stared longingly, agreeing that it was an absolute shame we had missed out on it. 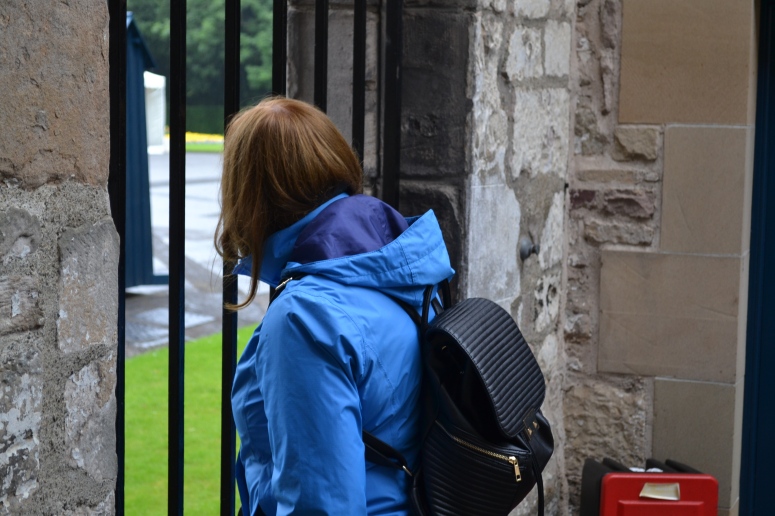 Along the way back up, the miserable rain hitting our faces no matter how we tried to prevent it, we took a brief detour through an historic and heartbreaking cemetery. 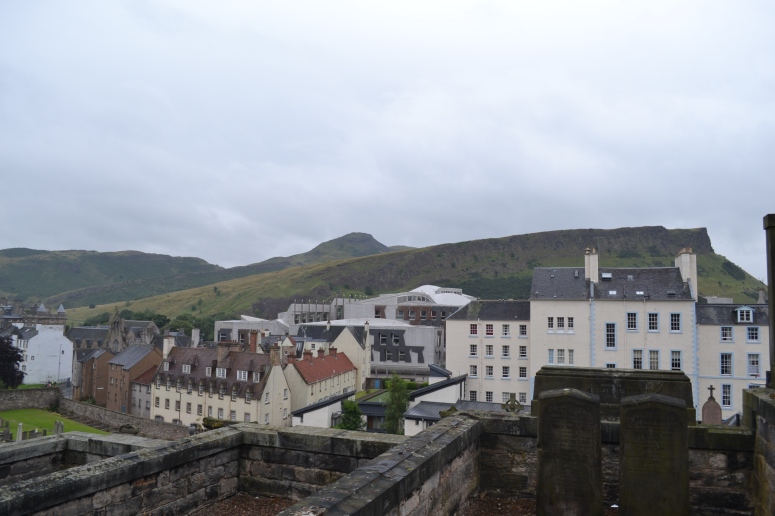 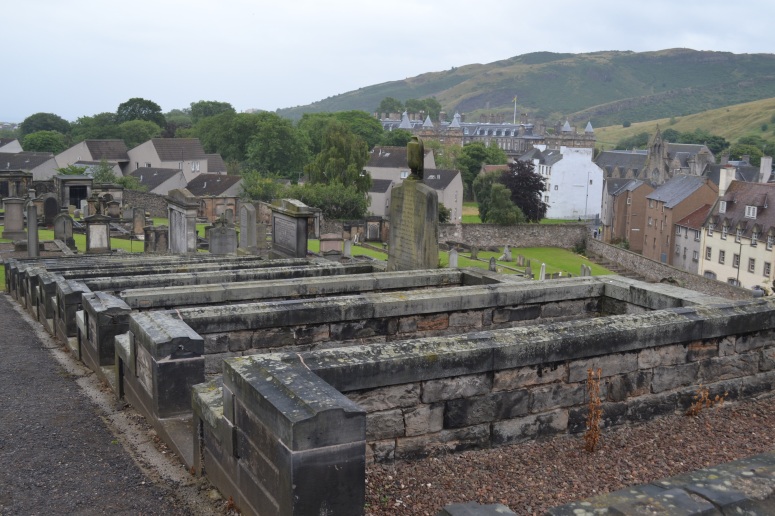 The rain had picked up, the wind was chilly, and we decided our best plan of action was to duck into a little cafe and warm up with a hot drink. It proved to be a great idea, and we received a little free words of wisdom in the meantime: 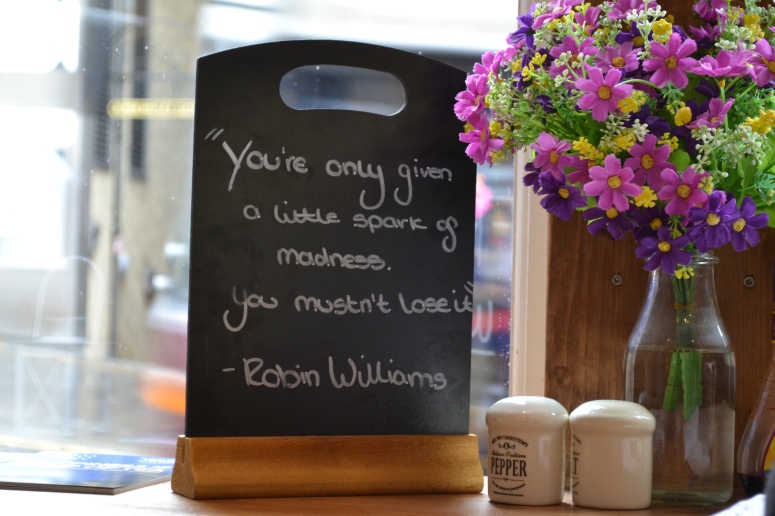 We made our way slowly back up, browsing through stores on our way to meet Jen and her friend near Edinburgh Castle. The weather was still largely uncooperative, with misty rain spraying our faces off and on, but it didn’t bother us much. In a way, it simply served as a reminder that this is Scotland. 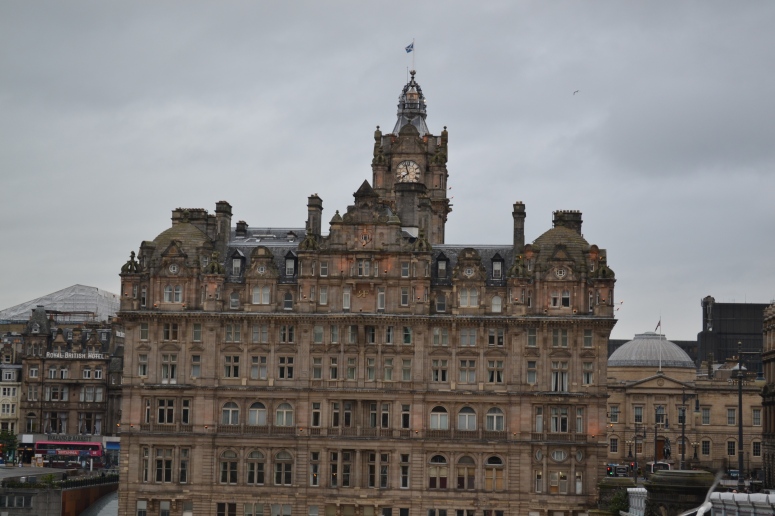 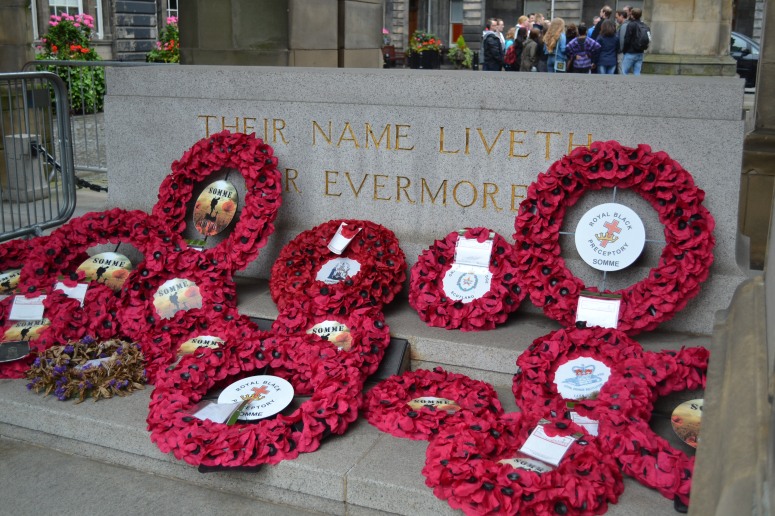 The city of Edinburgh became Scotland’s capital in the 15th century, but it originated as a fort on the hill. In the 11th century, King Malcolm III built a castle on top of the hill (Castle Rock), and the small town grew nearby, eventually flourishing in the 12th century. Edinburgh has faced its fair share of battles and periods of time when the English took control, yet the city continued to grow. 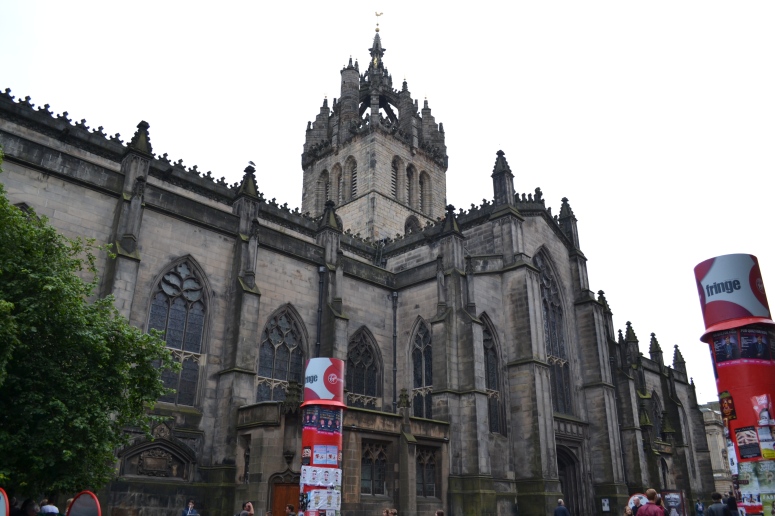 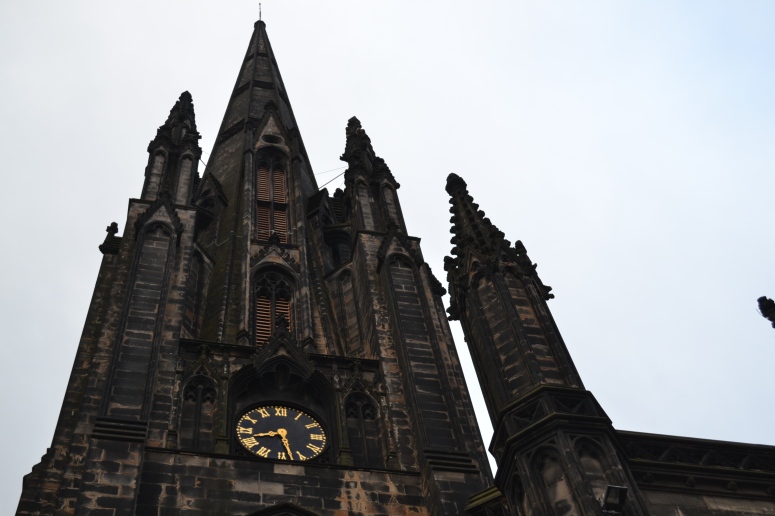 When we finally met my sister, she announced a change of plans – she would spend the night at her friend’s family’s rented home, and we could come back the next day and meet up with her again. We hadn’t planned on two days in Edinburgh, but mom and I were eager to see Holyrood, so we jumped at the chance to come back.

Have you been to Edinburgh? Did it surprise you in any way?