I’ve always been known as the go-to camera girl; the girl who will always have her camera on hand and will use it. Friends and family members sometimes don’t bother to even bring one, because they know I will have mine. With that in mind, you can imagine my shock as I looked back through my pictures of Florence and discovered that I didn’t take a single photo of the statue of David. I went to Florence and didn’t take any pictures of one of the most famous statues in the world.

Granted, there are other factors that make it understandable (this being aside from the fact that you aren’t supposed to take pictures in the museum), but I’m getting ahead of myself.

Our second full day in Florence dawned bright and early, and with it was the start of a different kind of adventure. I rolled out of bed and was promptly sick to my stomach, with the familiar pain associated with food poisoning radiating through my body. That’s right – in a country where people rave about how good the food is, I wound up with food poisoning. There was absolutely no way it was from drinking – the only alcohol I had on the entire trip was one sip of my friend Alex’s Bacardi Breezer, as I was on a strict self-imposed no-alcohol policy after a very rowdy New Years Eve celebration.

I won’t go into the nasty details, but suffice it to say this is the worst case of food poisoning I have ever had. Needless to say, I was extremely grateful when our chaperons agreed to let me sit in Piazza Duomo instead of standing in a long line and then wandering around the museum. I felt so ill that at that point in time I wasn’t overly upset that I would miss seeing the statue of David. My friend Greg offered to sit with me so I wouldn’t be alone, and we spent a couple hours sitting on the cool steps across from the Cathedral of Santa Maria del Fiore. I love to people watch, particularly in a foreign country, so the time passed easily for me. 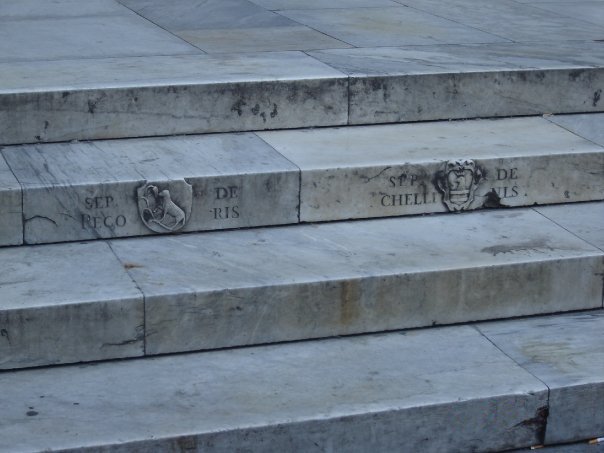 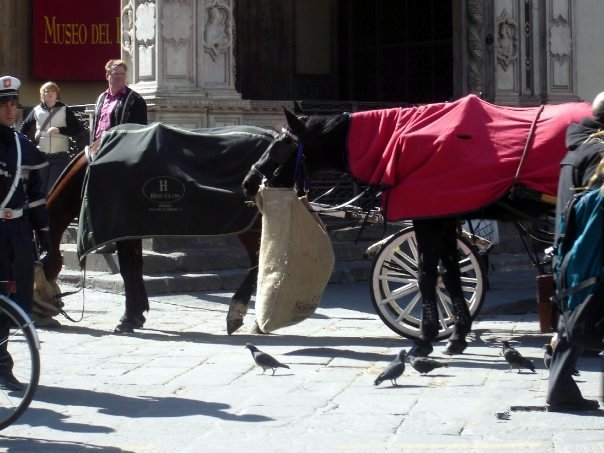 The longer I spent sitting outside in the cool spring air, the better I began to feel physically. Of course, the downside was that as my health increased, my frustration and anger at myself for skipping out on the Statue of David simultaneously increased.

While Greg and I sat on the steps watching people, horse-drawn carriages and adventurous pigeons, our group was standing in line for two hours. It turns out there was a mix up, and our group didn’t have the proper reservation, so my teacher sent a few people to see if I was feeling okay to see the museum.

The other plus – besides the fact that I was able to skip standing for two hours – is that my friends were nice enough to purchase a drawing of my name for me from a local street artist!

The statue of David is located within the Galleria dell’Accademia, along with countless other Renaissance sculptures. The statue of David is a 14 ft depiction of the biblical hero. It was created between 1501 and 1504, and was commissioned by the Opera del Duomo. If you want to read more, I highly recommend looking at the website’s David-specific page, as it goes into greater detail. It still can’t compare to being there in person, gazing up at such an incredible work of art, so if you’re able to go, I strongly advise it.

Following the museum, our time in Florence had come to an end. We boarded the bus again, bidding a fond farewell to yet another Italian city I fell in love with. It wasn’t too hard to leave, though, as we were Roma-bound!